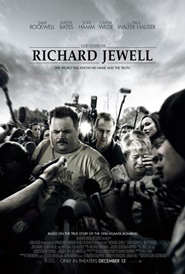 I often say that if adults had the hearts and minds of children, a lot of the world’s problems would simply go away.

Hatred would go away.

Cynicism would go away.

Violence would go away.

The ways of the world often corrupt the innocence that we have, as we grow older.

Even one of my favorite bands, Earth, Wind & Fire, sang about it on the song, “That’s the Way of the World.”

However, adults (including me) often do not know what in the world they are talking about because when adults have the mindset of naïve children like in the movie “Richard Jewell,” that stuck on stupid mentality might get that person stuck in the prison system for life.

When many people get a job in the supply room of a company or organization, they just do their job.

They do not go over and beyond what is required.

Many just do their job, shut their mouths and cash their checks.

When Richard Jewell finds out that one of his superiors, lawyer Watson Bryant (Sam Rockwell, “Jojo Rabbit”) likes Snickers candy bars by observing the waist basket at his cubicle; he restocks his desk drawer with Snickers.

The supply room clerk does the same thing when it comes to Kleenex and other necessities for the job.

As a result, he strikes up a respectful friendship with Watson, who bequeaths Richard Jewell with the nickname, “Radar.”

That nickname proves appropriate as Richard Jewell finally leaves his job as a supply room clerk for the government, and takes his dream job in “law enforcement.”

Before Richard leaves the government to become a big time security guard, then police officer, then FBI, agent as he plans, Watson gives him some sound advice.

When many people achieve power on the job or via money, they become jerks by letting that power go to their head.

Watson warns Richard not to become one of those people.

But does Richard heed the common sense wisdom from Watson?

No, he does not listen.

Not listening causes him to lose several jobs in law enforcement.

The “Radar” nickname given to Richard because he notices everything, good or bad, becomes too appropriate, unfortunately.

The overzealous Piedmont College security guard even begins arresting people on the highway, even though the school has no jurisdiction off campus.

Suddenly out of work, Richard Jewell finds himself in his 30s and still in his bedroom at his mother’s house.

But when his friend informs him that the City of Atlanta needs security guards for the 1996 Summer Olympics, he has no other option but to take the job.

While his ultimate aim is to return to the law enforcement profession, this quick gig could become the bridge to get to his destination.

But just like on his other “law and order” jobs, Richard Jewell begins to take the law and order thing a little too seriously.

While many other Olympic employees go through the motions of their job while enjoying the Olympic festivities, Richard really does his job to the extreme.

But that intensity pays off when the unthinkable happens at the 1996 Summer Olympic games in Atlanta.

Some terrorist places a strange backpack near a television/concert production tower.

However, more seasoned law enforcement officials believe that it is simply someone’s alcohol that they accidentally left.

But Richard’s intuition proves second to none when he discovers a pipe bomb in the abandoned bag.

Almost instantly, law enforcement begins securing the perimeter and trying to ensure that people move as far as possible from the bomb.

Unfortunately, that does not totally prevent the carnage.

As a result of the pipe bomb, two people lose their lives and 100 suffer injuries.

But Richard Jewell’s efforts do not go unnoticed as he becomes an instant national celebrity, performing his rounds on the talk shows and news shows following his “heroic” actions.

However, that hero label goes away quickly as Richard Jewell becomes a person of interest.

The security guard begins raising eyebrows because of his knowledge of the bomb and the potential bomber.

How does he know so much about explosives?

How does he know so much about terrorists?

Why does he have so many weapons at his mother’s house?

But the biggest question I have for Richard Jewell is why do you insist on doing everything your lawyer tells you not to do?

Why do you have a childlike trust of law enforcement?

And why can’t you realize that you look suspicious as you know what?

The pain that Bobi experiences as her son becomes the prime suspect in the 1996 Olympic bombing looks like it will lead her to an early grave.

Olivia Wilde (“The Lazarus Effect”) plays Atlanta Journal Constitution reporter Kathy Scruggs and is the walking embodiment of what is wrong with journalism.

People will do anything and everything to get a story, not caring about the consequences and repercussions of their action and inaction.

And lets just say, he does not do that great of a job.

People who remember the 1996 Olympic bombing already know the outcome of “Richard Jewell.”

But director Clint Eastwood and Hauser still deliver a jewel of a film.

“Richard Jewell” comes across as a cautionary tale about how naiveté and blind trust of law enforcement could lead to catastrophic results for those not strong or resourceful enough to speak up for themselves.