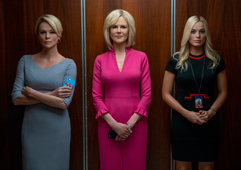 I am embarrassed to admit that I got #MeToo fatigue a long time ago.


While sexual harassment remains rampant in corporate America, and beyond, many people in my opinion abused the movement to paint innocent men as predators.

But just when I got burnt out on the subject, a “Bombshell” dropped on me to remind me of just what some women experience in the workplace by men who couldn’t pull a “dime” if they had 10 pennies on them.

In the movie “Bombshell,” filmmaker Jay Roach and screenwriter Charles Randolph create a warning to powerful men who abuse their power, creating a #MeToo masterpiece in the process.

According to the expose “Bombshell,” women at Fox News had to give a little head if they wanted to get ahead in their career thanks to the hostile work environment created by Fox News head honcho Roger Ailes (John Lithgow).

Or, Roger could destroy dreams and create nightmares if his wet dreams did not become a reality.

She comes from a religiously conservative family that worships Fox News.

While Kayla has a good job as a producer for Bill O’Reilly (Kevin Dorff), she knows with the right opportunity she can reach the level of Fox News superstars like Megyn Kelly (Charlize Theron) and Gretchen Carlson (Nicole Kidman).

Unfortunately, Gretchen has found herself in the doghouse at Fox News.

Gretchen once had the prime spot co-hosting “Fox and Friends,” but after some inappropriate comments from her male colleagues, Gretchen finds herself enduring the punishment for the boys’ behavior.

But anyone in journalism will tell you, the timeslot a journalist receives for his or her show proves how important the network views them.

It is as if Gretchen receives her demotion as a first step toward termination.

Gretchen has constantly complained about the sexual harassment that women endure at Fox News but to no avail.

Instead of supporting her claims of sexual harassment, Fox News executives tell her that she needs to learn to get along with the boys a little better.

Although the sexual harassment coming from Roger and his cronies at Fox News is well known within the journalism field, who wants to challenge a man as powerful as Roger?

Whistleblowers, truth tellers and snitches do not get much respect on the streets or on Wall Street even if the alleged perpetrators have very little power and influence.

However, when the perpetrator has influence in their building and in every other building in that particular industry, one’s career can end even if a person only wants to end sexual harassment and a toxic work environment.

Therefore, when Gretchen sees the writing on the wall in “Bombshell” she has to stock her own bombs in case she needs to drop on an explosion on Roger and his co-conspirators at Fox News.

She hires her own lawyers to fight a potential wrongful termination.

But her legal strategy and preparation in “Bombshell” drops the biggest bomb on the house that Roger Ailes built and almost single-handedly destroys it.

On the other hand, Megyn Kelly’s problems at Fox News come from a viewer standpoint.

Furthermore, some Fox News viewers like shocking stories that appeal to their prejudice like stories on race, crime and illegal immigration.

Therefore, when journalists adhere to the tenets of journalism and hold politicians, or wannabe politicians, accountable, some conservative viewers want blood.

When Megyn Kelly asks tough questions about sexual assault at a debate in “Bombshells,” as any respectable journalist should, she becomes a target for lunatic members of the President Trump cult.

Fox News wants to please Trump and his supporters in “Bombshells.”

But for some strange reason, the network shows more love and support for a politician than their own people in the building, namely the women who work for Fox News.

The question in “Bombshell” becomes what bomb will have the most adverse effect on Fox News, a toxic work environment or its placating to politicians while ignoring the role of real journalism.

“Bombshell” shows why working in corporate America can be straight hell.

Doing the right thing is frowned upon.

And unfortunately, people (male and female) will sell their soul for status and financial prosperity.

Like “Richard Jewell,” moviegoers will know the outcome of “Bombshell” if they watch the news.

But that does not stop Roach from creating an explosion with “Bombshell.”

Theron, Robbie and Kidman give performances worthy of award consideration.

But what gives “Bombshell” its flavor is the comedy and almost parody like feeling in some of the scenes.

The actors playing some of the well-known characters in “Bombshell” will produce some laugh out loud moments.

People like Geraldo Rivera probably will not find much amusement in “Bombshell.”

Furthermore, many fans of Fox News and supporters of Trump will cry fake news at the depiction of the powerful and conservative media giant in “Bombshell.”

But in spite of the fake news claims to come, “Bombshell” is still the bomb and very necessary.

Powerful men, and non-powerful men alike, need to see “Bombshell” so that their behavior at work and on the streets will not be as explosive as the ticking time bomb known as the former head of Fox News.

And likewise, many women who abuse the #MeToo movement should see how serious the issue is so they will not make false claims against innocent men.