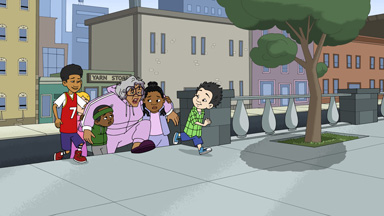 Tyler Perry haters can permanently take a seat, not because “Tyler Perry’s Madea’s Tough Love” is good, but because it needs that “good” because the writers of his animated feature do not produce the same high as the Madea innovator does with his own writing.

With “Tyler Perry’s Madea’s Tough Love,” the media mogul realizes a long dream of taking Madea, Uncle Joe and Aunt Bam (Cassi Davis) straight to children with an animated project.  The DVD is currently in stores.

In typical Madea fashion, she finds herself in a predicament by pushing a button on her remote control that clearly states do not push.

The old wise Simmons family matriarch immediately turns into an animated version of herself and finds herself in an animated world not too different from the real world she left.

In animated Atlanta, children are still disrespectful to their elders, inner city neighborhoods are still being neglected and the next generation is suffering as a result of the aforementioned problems.

Determined to teach a group of children some respect, she chases them through the streets of Atlanta, destroying many blocks in the process.

When she is “surprisingly” arrested for her shenanigans, the judge sentences her to community service at the Moms Mabley Community Center, a forgotten facility and an even more forgotten group of at-risk children.

Madea immediately sympathizes with the abandoned children and the abandoned youth facility and vows to save everyone and everything involved.

There is only one problem, it will take $25,000 to save it and mayoral candidate Betsy Holiday (Rolonda Watts) is determined to tear it down and spruce up all of Chastain Park regardless of how it affects the residents of the community.

While the successful filmmaker should be applauded for the Madea franchise and attempting to reach the youth with “Tyler Perry’s Madea’s Love,” he has three predicaments.

Either Madea’s capers do not translate well to a children’s cartoon, the writers were not up to his caliber or Madea is just suffering from old age and should be placed in a resting home for awhile.

The straight-to-DVD project is just not funny while its predecessors have been ridiculously hilarious with teachable moments.

Perry does a good job of teaching children morals and respect in this cartoon, which is missing in today’s children programming but it might not be funny enough to keep the attention of antsy children with short attention spans.

The best part of the DVD package is the “Madea Gets Animated” special feature that showcases how producers turn real action figures into animated figures complete with their own nuances and mannerisms.

The producers had to draw Madea and every character with every type of emotion and face to create a complete story, which is a skill that is often underappreciated.

Ultimately, children are often unpredictable.  They may love Madea as much as adults or they may loathe her.  Their opinion on the sassy old lady will determine whether Madea has new life in a new arena, or needs to take more time off from the spotlight.