Movie Review: ‘The Mummy’ Does Not Have Enough Life to Overtake ‘Wonder Woman’ 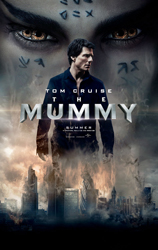 No First Place Finish for ‘The Mummy’

Gal Gadot and “Wonder Woman” should rest safely at the top of the box office again this weekend.

Tom Cruise’s “The Mummy” is the type of movie that film executives hope will become a summer blockbuster.

However, despite high hopes, “The Mummy” will not land Cruise the coveted number one spot thanks to the marvelous “Wonder Woman.”

But on a positive note, “The Mummy” while beyond weird and spooky, is not as bad as some critics have reported.

Like “Baywatch,” it is watchable, but still not very good.

“The Mummy” begins in ancient Egypt 5,000 years from present day.

Ahmanet (Sofia Boutella) is the daughter of an Egyptian pharaoh and next in line to the throne.

However, when Ahmanet’s father and his wife have a baby son, her rightful place on the throne is taken from her in an instant.

Upset at her predicament, Ahmanet makes a pact with evil forces to wreak havoc on the world.

However, her plans are thwarted and she is mummified alive as punishment.

The ancient Egyptians known for their technological advancements and intelligence are rumored to have an underground city of treasures and antiquities.

The delinquent duo hope to steal the ancient artifacts, which include jewels, and sell it on the black market but find more than they ever bargained for when they enter the hole, which contains the city.

Nick mistakenly releases the mummified remains of Ahmanet, which frees her soul and allows her to finally wreak havoc on the world 5,000 years after her brutal death.

Ahmanet chooses Nick as the mortal man, which will be used as her vessel of evil.

However, it is up to Nick, Dr. Henry Jekyll (Russell Crowe) and Jenny Halsey (Annabelle Wallis, “King Arthur: Legend of the Sword”) to devise a way to contain Ahmanet and remove her evil potential from the world once and for all.

Although creepy, from a visual standpoint “The Mummy” is a spectacle.

From sandstorms to collapsing buildings, the 3-D technology brings the danger right into the faces of moviegoers.

The ancient ruins in the Mesopotamian desert are exquisite and the acting is adequate for an adventure movie.

Although Cruise and Crowe are great performers, it would be nearly impossible for them to top past performances like “Born on the Fourth of July” and “American Gangster,” respectively.

Unfortunately, the storyline coupled with the oddities in “The Mummy” is not enough to make it a very good film.

It is definitely watchable, but not on the caliber of other 2017 summer blockbuster films.

Despite coming up short with “The Mummy,” Cruise has little to prove at this point in his career in spite of losing a bit of his popularity.

The Canadian-born actor already has possible blockbusters lined up for the future like “American Made,” “Top Gun: Maverick” and “M:I 6 – Mission Impossible.”

So Gadot and “Wonder Woman” can have the weekend box office race because Cruise will have more chances in the near future.