Film Review: And Oscar for Best Cinematography Goes to ‘Everest’ 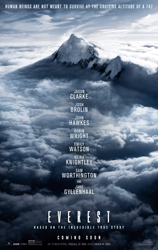 One week and two movies in and I already have to alter a statement made in regards to “Black Mass.”

Johnny Depp will give Jason Mitchell (“Straight Outta Compton”) a run for his Oscar money in the Whitey Bulger biopic, but Jason Clarke may be the one that ascends to the top of the mountain in the Best Actor category.

In his role as Rob Hall in the factual flick “Everest,” Clarke is equally compassionate, strong-willed, determined and relentless in his portrayal of a mountain climbing coach who fights for his life when he runs out of oxygen and help while stranded on Mount Everest during a severe snowstorm.

Many have tried. Many have failed.  And unfortunately many have succumbed to the treacherous conditions presented at such a high altitude.

However, that does not stop the countless people that travel to Nepal every year in an attempt to reach the summit of Everest.

By 1996, when “Everest” takes place, it has become such big business that climbers pay Rob and his company upwards of $60,000 to assist them on their ascent.

And despite the danger, men and women are still enthralled with the possibility of reaching the tallest point on Earth.

Some come because they have scaled all of the tallest mountains except Everest.

While others come because they want to be an inspiration to the children they encounter on a daily basis.

For about two months, the climbers are forced to leave their spouses and children to prepare and train to tackle such a huge obstacle.

Nevertheless, the obstacles that they face in “Everest” via the snowstorm and lack of materials will bring death closer to their door than they ever thought imaginable.

“Everest” is such a beautifully shot film that it will make casual moviegoers want to research how the filmmakers were able to capture the setting so exquisitely.

While I am the first to admit that Hollywood overuses 3-D technology, “Everest” is the type of film that 3-D technology was made for.

When climbers lose their footing, moviegoers will feel the horror that they feel.

When ice rumbles towards the climbers, moviegoers will feel like they have to dodge the ice to save their own life.

One can almost feel the frigid temperatures while watching “Everest.”

If “Everest” does not win the Oscar for best cinematography, those voters should resign and let me take their place as an Academy Award voter.

The only thing negatively that can be said about “Everest” is that early in the film, mountain climbing novices like myself may not understand the jargon that is used between climbers.

Nevertheless, no one can misunderstand the terror that the climbers must have felt back in May 1996.

And no one will be able to ignore the pain that their relatives must have felt when they were waiting for the news of death or survival.

While I will not say that “Everest” should absolutely win the Oscar in the Best Actor and Best Picture categories because “Straight Outta Compton” is by far the most important film that I have viewed in 2015.

But I will say if “Everest” does not walk away with some of the prizes, specifically in the cinematography category, I might voluntarily walk away for the Oscars in protest.