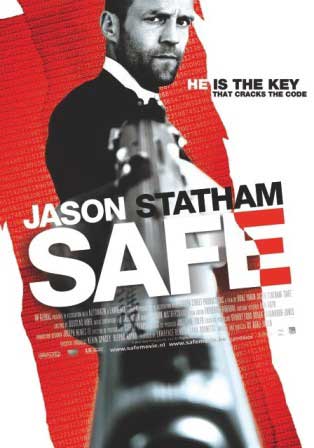 When I initially sat down to watch the Safe film, featuring Jason Statham (Luke), I thought that it was simply a more dramatic and gangster  version of Rush Hour. Though there are similarities between the two films, the Safe film is no rip-off, but a movie that stands on its own and is a pretty good film.

Luke is a joke of a mix martial arts fighter.  He is paid to take dives for the Russian mob and other organized criminals, but when he does not go with the plan in a fight, the Russian mafia kills his own family and vows to kill anyone associated with him.  He is left destitute on the street, contemplating suicide as the only escape from his grim reality.

His life is “saved” when he meets Mei (Catherine Chan), a Chinese math prodigy who has been kidnapped by the Chinese gang the Triads who use her math skills to effectively run their crime syndicate, which includes gambling houses.  Mei is efficient at memorizing numbers and is subsequently kidnapped again by the Russians.  When Luke realizes the same gangsters who are trying to kill him are also after Mei, he finds something worth living for.

Luke discovers that one of the numbers Mei memorizes for the Triads is actually a safe combination, which protects $30 million.  The problem is, the Triads, the Russian mafia and rogue police officers are willing to kill anyone for the contents of that safe.  Nevertheless, in Mei Luke finds someone worth living and dying for, and he is determined to redeem his name and life through that little girl.

Luke is a definitely a murderer, but a murderer with a conscious who is determined to right the wrongs of the world with justified violence.  He has been on the short end of the stick at the hands of “immoral criminals,” and is determined that Mei does not suffer the same fate.

Statham is excellent as always in this genre of film, but Chan steals the show as an extremely quick learner, book-wise and streetwise.  Expect to see her star continue to grow in Hollywood.

Although the storyline is simple, the Safe film succeeds regardless because action and violence will always be a safe bet to succeed in Hollywood.