‘Riddick’ Will Slay All Competition 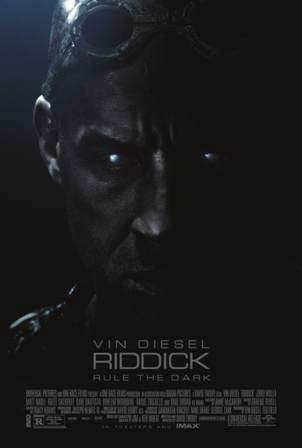 Survival of the Fittest

Man versus nature or man versus man.

In the case of Riddick (Vin Diesel) it apparently does not matter, because he is no ordinary man and no beast seems to be able to tame him.

For newcomers to the “Riddick” franchise, the latest installment catches people up on the past chronicles, and then does a superb job of telling a tale that is relatable to fans, old and new.

When Riddick refuses to take an oath of allegiance to his home planet, he is shipped off to another planet where he is left to die.  Everyone seems to want him dead from human foe to predator foe.

He can see civilization from his vantage point, but has to overcome nature and its creatures to make it to a land with water and the ability to sustain life.

However, when Riddick, with the help of a new companion, make it to the land of promise they find themselves with more foes to fight off.

Riddick is a wanted murderer (allegedly) and several vessels embark on his adopted planet to bring him to justice and collect on a lucrative bounty.

It seems strange that over 10 men would show up to capture one lone fugitive, but as one of the potential captors explains to his colleague, if you think one man can bring down Riddick, then you must not know Riddick.

Very little, if anything, is bad about “Riddick,” other than possibly Diesel displaying the same bravado that he does in seemingly every movie.  But that is not a bad thing; it is what people come to appreciate in the action star.

His swagger is even turning senior citizen women into fans, even though they were previously not fans of action films.

Diesel’s calm, cool and collected demeanor is reminiscent of a young Isaac Hayes, just without the piano and in a much lighter hue.

The other actors in the film hold their own as well, bringing their own swagger to “Riddick.”

Dahl (played by Katee Sakhoff) possibly steals the show somewhat from Diesel.  She is not the stereotypical pretty face, but a woman that prefers to kick a man’s tail rather than get a piece of his tail.

Unfortunately for Santana (Jordi Malla), some men have to find that out the hard way.

Moviegoers are even blessed with a Bokeem Woodbine (“Ray”) sighting in “Riddick.”  In fairness to the veteran thespian who came to fame in “Jason’s Lyric,” he has enjoyed continuous work since the 1990s, but it is good to see him in a potential blockbuster again.

Most importantly, we get to see why Diesel is one of the top action film stars of his day.

And whether he is battling beasts, boys are “The Butler,” “Riddick” is sure to come out on top.