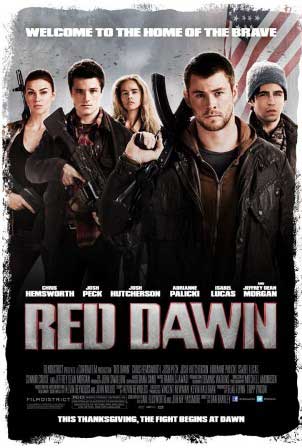 Could it happen here in America?  In a world filled with war and destruction, is it possible that a foreign military could invade Americans on United States soil?  If so, how would we respond to a foreign invader occupying American land?

These questions are tackled in the new Red Dawn film, which stars veteran actor Michael Beach (Lean on Me and Waiting to Exhale) as Mayor Jenkins of Spokane, Wash.

Matt Eckert (Josh Peck) is the reckless star quarterback of the local football team.  His father is a part of the police force and his brother Jed (Chris Hemsworth) has been absent from the family for six years after the death of their mother and wife.

The family barely has time to reunite when their Washington town is invaded by the North Korean military.  Citizens are killed.  Prisoners are stationed at concentration camp-style facilities, including Matt’s beloved girlfriend.  Those who evade the North Koreans have to worry about capture and betrayal by other Americans in their midst.

While many would cower and give in to the invaders, Jed uses his military training to create a band of insurgents to fight off the invaders and reclaim American soil.

Although moviegoers will cheer the insurgents or the “Wolverines” as they are called, the Red Dawn film never escapes the bad dialogue and unrealistic storyline that it tries to sell as patriotic.

It is extremely unlikely that a foreign military could take over American soil (the entire Pacific Northwest) as it is portrayed in the Red Dawn film.  It is even more unrealistic that a crew of teenage insurgents could overthrow the respectable, if not formidable, North Korean military.

In the original Red Dawn film, released in 1984, the invading military was from the Soviet Union and the likelihood of an invasion from the Soviets was very real because America was in the midst of the Cold War.

And while the North Korean army is no patsy, the likelihood that we could face an aerial invasion from a nation’s military is unfathomable in 2012.

Nevertheless, those who see the Red Dawn film will find pride in the patriotism showed by the Wolverines and those Americans who are motivated and encouraged by their strength and bravery.

Unfortunately, this does not make up for the fact that all movies should not be remade and if they are regrettably remade, they should not be made in an unrealistic way just so the film fits awkwardly into the modern reality in this country.