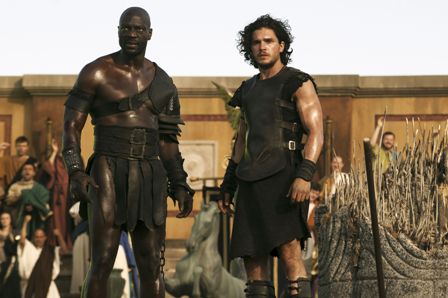 Survival does not always come down to the strongest or the fastest, but sometimes it comes down to the smartest.

Throughout history, many people have been enslaved by the powers that be.  In biblical times, the Roman Empire represented the strongest superpower in the world, and often other groups were left to their mercy.

In “Pompeii,” Roman Senator Corvus (Keifer Sutherland) leads a military movement to quell the Celtic rebellion that is erupting around him.  Women and children are slaughtered with little regard, and an entire group of people is virtually eliminated.

Using his own ingenuity, Young Milo (Dylan Schombling) plays dead to escape a certain death at the hands of the Roman army.

Nevertheless, he is sold into slavery by the Romans, emerging years later as a brutal gladiator who is forced to fight to the death as entertainment for the citizens of Rome.

As a result of his prowess in the arena, he and other slaves are transported to the city of Pompeii for a fight in which the citizens of Pompeii hope to impress the leaders of Rome.

When a horse is injured carrying the slaves and wealthy merchants to Pompeii, Milo (Kit Harington) urges Cassia (Emily Browning) and the other aristocrats to allow him to tend to the horse.

Milo, a Celt, comes from a people dependent and knowledgeable about horses.

When Milo kills the horse out of mercy, it touches the heart of Cassia.  She is impressed that a slave could have so much physical strength, yet so much compassion.

Although love between a slave and someone from a noble family would be forbidden, their attraction to each other is obvious.

Young Cassia is at the age of marriage, but flees the glamorous city of Rome to escape the pressure of a forced and coerced relationship with Senator Corvus.

Nevertheless, Corvus comes to Pompeii to witness the battle between the gladiators and coerce Cassia and her parents into marriage.

When Mount Vesuvius begins to erupt, Milo must fight to save Cassia from the brutal hands of the senator and a forced marriage, and ultimately save her life and their future even though everyone faces imminent peril as well.

“Pompeii” is not a fighting, action film nor a love story; it is a combination of both.

Paul W.S. Anderson’s “Pompeii” is a story of forbidden love and how true romantic feelings know no cultural, status or socioeconomic barrier.

Despite the advances of a rich and powerful senator, Cassia’s heart is with a mere slave who cannot provide her with riches and comfort, but can woo her with strength and protection.

The movie does a great job of straddling the fence of not just being a stereotypical guy flick, complete with violence, death and destruction and not overwhelming audiences with a sappy love story, which is the hallmark of formulaic chick flicks.

However, “Pompeii’s” greatest strength might be its greatest weakness, which is a direct parallel to the strengths and weaknesses of Milo.

The film’s greatest strength is that it does not drag.  Action in “Pompeii” is swift and abrupt.  But in that abruptness, moviegoers do not get to see how Milo goes from a little boy to a strong gladiator.

Furthermore, even though Milo obviously ages throughout the film, somehow Corvus finds the fountain of youth and does not age.

Likewise, Milo’s strength is that he can slay any foe, yet his weakness for Cassia almost leads to a premature demise.

Ultimately, survival does not always mean survival if it is without true love and “Pompeii” proves that true love is real strength.