Movie Review: ‘The Fate of the Furious’ Gets Ride Back on Track 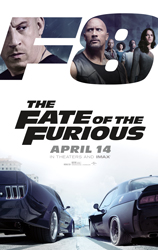 “The Fast and the Furious” film franchise epitomizes the family bond.

However, what would make Dom flip totally on the only family he knows in “The Fate of the Furious?”

Brian (Paul Walker) and Mia (Jordana Brewster) went their own way, away from the family in “Furious 7,” but Dom still has the love of his life Letty (Michelle Rodriguez), Roman (Tyrese Gibson) and Tej (Chris “Ludacris” Bridges) depending on him.

Unfortunately, his remaining family members are not enough to get Dom to remain loyal and not go rogue in “The Fate of the Furious,” and the world might have World War III on its hands as a result.

In “The Fate of the Furious,” Dom and Letty are enjoying their honeymoon in the tropical paradise of Havana, Cuba.

The destination is ironic because Cuba is known for their out of date cars, and the entire “Furious” film franchise is built on new, blistering fast and innovative automobiles.

Despite being in a slower locale, Dom still finds time to get into some fast and furious trouble.

To save his cousin Fernando (Janmarco Santiago) from mounting debt, Dom offers to race his cousin’s creditor for his car in order to settle his cousin’s death.

In typical Dom fashion, he finds a way to defeat the fastest car in Cuba with one of the slowest cars on the island.

However, Dom gains a new ally in the process and he is able to call in a favor from his opponent later in “The Fate of the Furious.”

On the way home, Dom is approached by Cipher (Charlize Theron), a cyber-terrorist who wants Dom to work for her organization.

When Hobbs (Dwayne Johnson) comes out of a semi-retirement to help American government officials retrieve an EMP, a class four weapon of mass destruction from Cipher, Dom betrays his entire organization and takes the weapon to Cipher instead.

The cyber-terrorist Cipher knows that the only crew on the planet that can stop her from obtaining more weapons of mass destruction is Dom’s crew and they cannot defeat her if Dom is on her side.

“The Fate of the Furious” then becomes a race against time as Cipher, with the help of Dom, seeks to accumulate more ammunition like a nuclear weapon, while Hobbs and the crew tries to stop her from igniting World War III with all of the weapons at her disposal.

“The Fate of the Furious” is another high-paced adrenaline rush that gets the furious locomotive back on track after a less than stellar “Furious 7.”

The eighth installment of the film franchise does a good job of acknowledging the missing pieces of the family, while not focusing too much attention on the absence of Walker and Brewster.

Thankfully, Roman is still Roman.  He is still whining and complaining about every adventure the family takes on.

Letty is still devoted to her man now that her memory has fully recovered.

And “The Fate of the Furious” brings in some new life with characters like Little Nobody (Scott Eastwood) and Ramsey (Nathalie Emmanuel).

But the film sticks to what it knows best.

Director F. Gary Gray does a great job, also, of weaving in elements of the first seven films like God’s Eye along with several cameo appearances by past characters.

Nevertheless, fans will know how the story will end.

Furthermore, fans will know not to expect outstanding acting performances, which is not even the reason many watch action movies.

In a ranking of the eight “Fast & Furious” films, “The Fate of the Furious” ranks sixth ahead of “Furious 7” and “The Fast and the Furious: Tokyo Drift.”

True fans of the franchise know that being sixth in a string of excellent movie is no shade at all.

Ultimately, fans of “The Fate of the Furious” will come to the theaters for the family.

Fans will come to the theaters to see the hottest cars on the planet.

And fans will come to see possibly the greatest current film franchise on the planet.