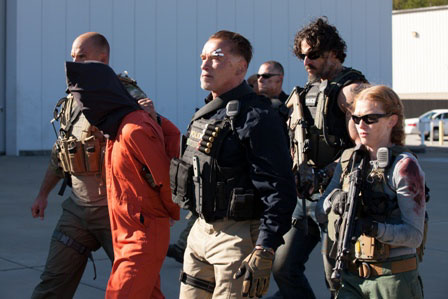 Keep Your Friends Close and Your Enemies Closer

Sometimes real life makes it hard to differentiate between one’s friends and one’s enemies.  And when money finds its way into the picture, it can even turn family members against one another, which can eventually lead to sabotage.

Despite the unexpected and brazen heist, the FBI had its own counter-investigation of the drug cartel and is aware of the stolen money.

One by one, Breacher and his crew are called in and interrogated, eventually leading to the suspension of the crew from active field duty.

To make matters worse, when the crew later returns to the sewer to retrieve the stolen money, it is missing, which means not only are they out of a job, they’re also out of millions of dollars.

Obviously, stealing $10 from a ruthless drug cartel can lead to consequences and repercussions, so stealing $10 million is almost like committing suicide.

One by one, members of the crew find themselves on the wrong side of life and death, from Tom (Max Martini) being run over by a train to the only witness of the crime being nailed to a ceiling.

Like a lot of action movies, in “Sabotage,” moviegoers can narrow the list of culprits to the heist.

Unlike other action films, however, “Sabotage” has more than one sabotage, for lack of a better term, which keeps the film interesting, despite some of the scenes lagging during their DEA suspension.

The film, co-written and directed by David Ayer, is “player” when it could have easily been corny.

Every wannabe “player” wants a real nickname, but only a few have enough swagger to deserve a unique alias.

In “Sabotage,” all of the DEA agents are player enough to earn a real nickname.

Even the person without a nickname, Lizzy (Mireille Enos), has swagger.  She probably has more swag than her male counterparts.

The dialogue by Ayer and his writing partner Skip Woods for Lizzy is genius.

There is something “gangster” about a girl who urges one of her homeboys to “hit that” and “get you some” when she recognizes another attractive woman in Caroline (Olivia Williams).

Unfortunately, “Sabotage” falls into the trap of unrealistic gun battles.  In a shootout in the woods, bullets race past Tripod’s (Kevin Vance) head but none come close to piercing him.

Furthermore, the most talented actor in the cast, Howard, does not have a big enough role to showcase his broad talent.  It is kind of like Prince singing backup for Wendy and Lisa from The Revolution.  True, they are also very talented, but not as talented.

Nevertheless, it is good to see Schwarzenegger back in his element, kicking behind and taking names.

“Sabotage” probably does not need to sabotage the box office on opening weekend because it is a film that does not fall into the trap of being obvious with an expectant outcome.

Breacher is not just a savage brute of a DEA agent, but a man with deep emotions and feelings for his loved-ones.  And one that will do anything to right a wrong that was done to those who are a part of his trusted crew.