Movie Review: ‘Non-Stop’ Lives up to Name but Hard to Believe 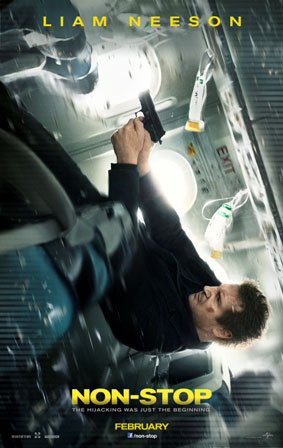 The good thing about cinema is that it is an escape from reality.

Often, movies are unrealistic and far-fetched but because moviegoers seek an escape from reality, reality is not really necessary to create a good film.

“Non-Stop” falls into the category of movies that are exciting and thrilling, but unrealistic.

Liam Neeson stars as Bill Marks, a federal air marshal struggling with alcoholism and the death of his beloved daughter Olivia.

What begins as a typical flight turns into an act of terrorism after Marks begins receiving anonymous text messages demanding $150 million be deposited into an offshore bank account that has been set up in Marks’ name.

The anonymous terrorist threatens to kill a passenger every 20 minutes if the money is not transferred.

Every one is a potential threat, from other marshals and airline employees who can walk by security clearance or someone who is not even on the plane.

The people that he believes are trustworthy like passenger Jen (Julianne Moore) and flight attendant Nancy (Michelle Dockery) cannot be completely trusted until the plane is safely on the ground and a catastrophe is avoided.

What makes matters worse is that whoever the culprit is has framed Marks, making it appear that he is the terrorist making the demands.

Marks’ colleagues on the ground will not listen to his pleas, nor will pilots.

Nevertheless, his job is to save as many lives as possible despite the reality that all will not make it off of the plane alive.

Credit has to be given to the writers of “Non-Stop,” John W. Richardson and Christopher Roach, along with director Jaume Collet-Sera, for being creative enough to make the story stretch into a 106 minute feature length film.

Some characters in “Non-Stop” stand out as potential threats, but others will totally catch moviegoers by surprise.

What could have been a storyline that only resulted in a good short film, definitely will keep moviegoers guessing and anticipating the outcome.

The acting is superb by Neeson and Moore.  And while Nate Parker, who plays Zack, has a smaller part than normal, the film marks a departure for him from roles his fans are accustomed to seeing him in.

Filmmakers get an “A” for effort and creativity, but believing that a person can cause or predict a death on a plane every 20 minutes without being recognized is highly unlikely.

Furthermore, one will find it impossible to believe that a person can open up an offshore bank account in someone else’s name or that a real terrorist would be stupid enough to demand money and then force the victims to wire it to their own personal account.

Nonetheless, people do not always watch movies to catch a glimpse of real life, but to escape from the pressure of real life.

While “Non-Stop” might not alleviate the pressure of real life, it will take moviegoers on a thrilling and suspenseful ride and make one question the next move for international terrorists.

“Non-Stop” will also make one question how safe airline passengers really are even after beefed up security in the aftermath of Sept. 11.