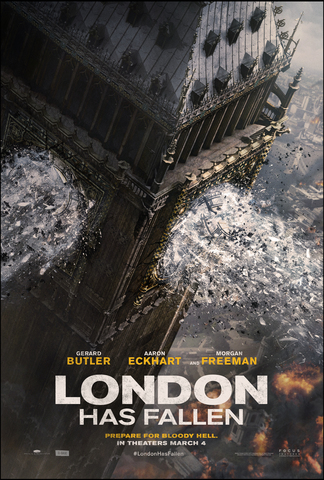 Fans should not always take every detail of a movie too seriously.

Many people view movies to escape reality, not just to see an exact replica of reality.

“London Has Fallen” masters this concept.  The film deals with the real-life horror of terrorism even if some of the best scenes are highly unlikely in the real world.

In “London Has Fallen,” Mike Banning (Gerard Butler) is a Secret Service agent who is contemplating resigning from his job of protecting President Benjamin Asher (Aaron Eckhart).

He has a new baby on the way and would love to spend more quality time with his growing family.

However, when the British Prime Minister dies suddenly, he has to accompany the president to Europe for the state funeral, which will be filled with foreign dignitaries.

The fact that so many world leaders will be at one location makes the funeral a terrorist’s playground, and Mike and Lynne Jacobs (Angela Bassett) have to work overtime to ensure the president’s safety.

What makes the president’s trip even more worrisome for the Secret Service is that the president does not have many Arab or Middle Eastern fans after a botched attack on suspected terrorists two years earlier.

When things go awry in “London Has Fallen,” no world leader is immune from the wrath of terrorist mastermind Aamir Barkawi (Alon Aboutboul).

And it is up to Mike to protect the leader of the free world at all costs while trying to determine whom he can trust and whom he cannot trust.

“London Has Fallen” is a good adrenaline rush of a movie, which is the goal of any good action flick.

Butler is a bada$$ in the movie, which makes up for his recent flop of a film, “Gods of Egypt.”

He is much more believable as a Secret Service agent than an ancient Egyptian, if you catch my drift.

The film is a gun lovers dream.

The non-stop adrenaline rush of a film is constant action, near death experiences and double crosses.

The concept of the film is genius and not so genius at the same time because hopefully it does not give anyone any slick ideas for possible attacks.

Like any coup or revolution, however, the attacks have to have participation from within and it might be obvious to some from the very beginning who that mole is.

Furthermore, from the outset of “London Has Fallen” it is obvious that terrorists will attack all of the leaders gathered in Europe for the funeral.

What isn’t so obvious about the impending doom is how those terrorists will attack and what lengths they will go to see their abhorrent mission through.

The lengths they go to are extremely exciting and extremely unlikely simultaneously.

However, being unpredictable and realistic does not a good film make.

And “London Has Fallen” proves that a film can be both predictable and unrealistic at times and be down right good.

All an action film needs is a bada$$ protagonist, some bullets, missiles, grenades and fast cars and action film lovers will definitely take it seriously and seriously enjoy themselves.