Movie Review: ‘Bright’ Tries Not To Give Way To Darkness 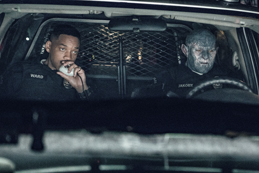 Divisions of all sorts preventing people from coming together and realizing that people from different backgrounds have more in common than meets the eye.

In the Netflix original film “Bright,” the races divide the city of Los Angeles in more ways than one.

The elves are the elite of modern society.

That particular class of people controls everything and wields the most power.

In short, the elves are the upper class of society.

The middle class consists of people like humans beings that real, modern society is accustomed to.

Human beings consist of the middle class or working class, like police officers and gang members.

The middle class runs the gamut of hardworking people to criminals.

The lower class consists of the orcs.

The orcs are a strange looking group of people who are very rough around the edges.

All of the orcs, with one exception, represent the underbelly of society and almost totally consist of criminals and miscreants.

Understandably, the orcs and the police do not get along.

So when an orc name Jakoby (Joel Edgerton, “Loving”) is partnered with a human named Ward (Will Smith, “Collateral Beauty”) on the Los Angeles police department as a part of its work diversity program, Jakoby and Ward are forced to choose sides with members of their races all demanding that they remain loyal to their own kind.

Further complicating their relationship is the existence of another select race of people called the brights.

The brights possess a magic wand that can control the universe in a negative way if it lands in the hands of the Dark Lord.

The Dark Lord wants to rule the world in darkness, but when Jakoby and Ward come across the magic wand, the Dark Lord and all of its evil forces come for them with bad intentions.

To put it mildly, “Bright” is definitely a different type of film.

No one will accuse it being too derivative of other films, although there are elements of films like “Training Day” in the film.

Smith and Edgerton deliver marvelous performances as to be expected.

The former is excellent as always with his comedic timing.

In all of his films and past television programs, Smith has a knack of saying the perfect line in the perfect way to get the perfect reaction from the crowd.

It would be interesting to see how much, if in any way, Smith deviates from the script to make his characters unique to him.

Unfortunately, “Bright” might be a little too different with its obsession over the magic wand and the various races of society.

Nevertheless, “Bright” does contain a moral or message that needs to be heard today and probably for the rest of time.

No matter what someone looks like, all races of people are the same because they belong to the human race.

If moviegoers can grasp that message after watching “Bright,” then the movie has a bright side despite its weirdness.