End of Watch Film a Must-Watch 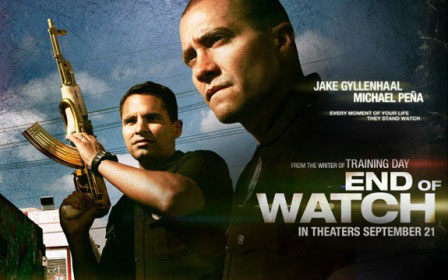 Police officers attempt to protect and serve their community.  However, often those same police officers need protection themselves.

The End of Watch film delves deep into the professional lives of two members of the Los Angeles Police Department, who are more brothers than simply partners.  Spending the majority of the hours in a day side-by-side with another person tends to bond you in ways that go beyond the professional capacity.

Often “brotherhood” can bring two young men together from vastly different backgrounds and unite them behind a common cause and purpose.

Jake Gyllenhaal plays Brian Taylor, a young Caucasian male with an aptitude for more than understanding the streets.  He is intrigued by women who can challenge his intellect, not just challenge him in a physical nature.

Michael Pena plays Mike Zavala, his partner-in-crime elimination.  He has a more simple approach to life and women.  He is of Mexican descent and found his wife in high school and she encouraged him to pursue a career in law enforcement because it provided a comfortable lifestyle for someone without a college degree.

Despite their differences, both share a desire for adventure that goes beyond what most stereotypical cops do on their beat.  And both of the women in their lives share an apprehension about their job and the danger it brings on a daily basis.

Mike and Brian share the type of friendship that crosses racial lines and allows them to spew racial jokes at the other’s expense, with full knowledge that it is done out of love and mutual admiration.

They are also admired, as well as ridiculed, on the job for their daredevil tactics, drawing the ire of their superiors as well as their colleagues for their violent disposition and fondness of movie cameras.

The End of Watch film follows the normal routine of two officers, whose lives become anything but normal when they stumble upon a human trafficking ring run by the Mexican cartel.

What could have been a stereotypical cop film turns into a portrayal of what life is really like for Los Angeles’ finest.

The End of Watch film is unique because it is truly filmed through the eyes and perspective of police officers.  Brian has returned to school to get his degree and takes a film class as an elective.  He hooks up a camera to his and Mike’s uniform and films their encounters with locals.

The two compadres of law enforcement take on “routine” police calls to out of the ordinary discoveries of mutilated, dead bodies.  Knowing that the film is shot through an amateur’s eyes we get shaky images and a camcorder effect, but those imperfections are perfect for the perspective the filmmakers are trying to capture.

Those who do not have an admiration for what police officers go through, get a graphically realistic picture of the true heroic nature of police officers in the End of Watch film.

Nevertheless, the realistic nature that makes the End of Watch film an enjoyable feature, lends itself to its drawbacks.

Most films or television series have a set plot where the plotline immediately becomes obvious and the protagonists have to figure out the plotline.  The End of Watch film is such a realistic portrayal of police life that it stalls in some places before the real action comes to a climax.

Like most people’s daily lives, even an officer’s daily life is not always movie-worthy.

Nevertheless, the End of Watch film succeeds because it shows the type of danger law enforcement puts themselves in on a daily basis for civilians.

Furthermore, the filmmakers truly succeed in realistically telling their story from their perspective.