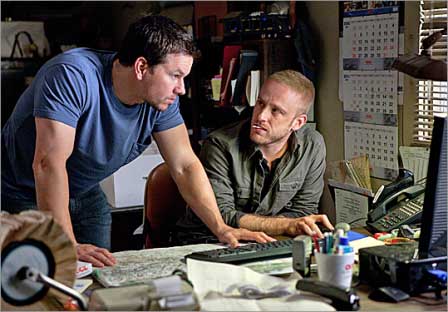 Another Hit for Wahlberg

Mark Wahlberg has done it again.  The rapper-turned-actor’s string of hit action films continue with the Contraband movie.

Before starting, let’s get the bad news out of the way before focusing on the good news.  The Contraband movie drags just a bit at the beginning while setting up the story line, but once the action heats up, the film kicks into another gear, and thankfully does not conclude with a formulaic and predictable ending.

The Contraband movie begins in New Orleans before shifting to Panama.  Wahlberg plays Chris, a talented smuggler who has gone legit in life with a home security company, a beautiful wife and two sons.  He initially followed in his father’s footsteps into a life of crime, but marriage and fatherhood has changed him and he tries to be the role model he never had to his brother-in-law Andy (Caleb Landry Jones).

While smuggling 10 bricks of cocaine into the United States, Andy’s boat is raided by customs agents and he follows criminal protocol by dumping the drugs into the ocean.  However, when drug lord Briggs (Giovanni Ribisi) realizes his drugs have been lost, along with the money that would come from it, he gives Chris two weeks to come up with $700,000 or risk losing his relatives, including his wife and children.

Against his wife’s warning, Chris decides to smuggle counterfeit money in the United States in an effort to relieve Andy’s debt to Briggs and his crew.

What makes the Contraband movie good is that it does not become predictable like other similar movies.  It will keep you guessing throughout the film.  Who is friend and who is foe?  Who survives and who lives?  And who faces justice and who does not?

The action sequences are violent but very realistic.  Too often violent scenes in films end with very little damage, injury or casualties.  The Contraband movie remains realistic, even during the scenes of violence.

The Contraband movie also does a decent job of dealing with the true emotions of reluctant criminals.  Some criminals commit their crimes out of greed and some out of necessity.  The film does a good job of dealing with the anxiety people like Chris feel when they are desperately trying to live a legitimate life.  Furthermore, it effectively deals with the emotions that loved-ones have to deal with, when their family members are involved in a life of crime.

The Contraband movie also deals with acts of betrayal that accompany large amounts of money.  The old cliché says, “Money can’t buy love or friends” but it can surely turn your friends and family against you when greed is added to the equation.

And at the end of the day, audiences will be cheering Wahlberg and his successful run of action films; job well done sir.