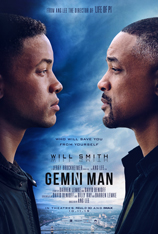 Will Smith is Still the Man in ‘Gemini Man’

Let’s keep it 1000 percent; Will Smith recently hit a snag critically with his films.

Films like “After Earth” and “Collateral Beauty” did not win over many critics, but Smith still reigned as a superstar in Hollywood because of his past films.

But “Gemini Man” should solve some of Smith’s dimming spotlight and with “Gemini Man” out and “Bad Boys for Life” dropping in 2020, the Fresh Prince appears to be back on his throne.

In “Gemini Man,” Henry Brogan (Will Smith, “Aladdin”) is the best assassin in America.

Henry has 72 kills working for the United States government eliminating enemies both foreign and domestic, which include international terrorists.

But after his last kill, Henry wants to retire as a shooter for hire.

His last kill of an international bioterrorist riding on a train proves successful.

However, the possibility those things might not go so well in the near future begins to weigh on Henry.

Before shooting the fatal bullet that kills the bioterrorist, an innocent little girl appears in Henry’s line of fire as she naively approaches Henry’s target on the train.

If Henry were off just a second or an inch, that beautiful little girl would have died.

The great thing about a job is that retirement usually exists when one wants to hang up the towel.

The problem with retirement is that no matter what an employer says, every employee is not replaceable.

No one can compete with Henry when it comes to shooting a weapon.

Therefore, when America needs someone of Henry’s talent the most, in the war against terrorism, they instead will have shooters that do not rise to Henry’s level.

Unbeknownst to Henry, Clay Verris (Clive Owen, “Valerian and the City of a Thousand Planets”) has a solution to the sad reality of life post-Henry.

What if Clay Verris can clone someone with Henry’s talent but raise him in a way that eliminates Henry’s human side?

Clay believes that a true warrior should kill at will and have no remorse, fear or doubt about his or her profession.

He creates a privatized paramilitary group of killers known as Gemini and Junior (Will Smith) is his prized student.

Actually, Junior is more of son to Clay than a student.

Junior has no problems killing random people if ordered to do so by his “Pop.”

So when Clay sends Junior to kill Henry he has no problem accepting orders despite the weirdness that he encounters when he confronts Henry.

Junior looks so much like a younger version of Henry that his colleague Danny Zakarweski (Mary Elizabeth Winstead, “10 Cloverfield Lane”) thinks that Junior could be Henry’s long lost son.

However, Henry has never married and does not believe he has any kids out there because he has always remained faithfully married to his job.

Junior is even perplexed because it is as if Henry knows Junior’s every move before he makes the move, making it basically impossible for Junior to kill Henry.

But what really is perplexing is the fact that the bioterrorist that Henry killed might not have been a terrorist after all.

He might have been an innocent civilian caught in the middle of a scandal of epic proportion.

“Gemini Man” is a unique film that overcomes some predictability and corniness towards the end because of Smith and the intense fighting sequences.

The motorcycle chase through the streets of Budapest is dope.

Imagine two people shooting at each other and basically fist fighting while chasing each other on a busy street.

But all action movies have fighting and violence, obviously.

However, “Gemini Man” has something very few movies have, which is the lead actor playing two different roles at various points in their life.

Smith plays Henry as a 51-year-old.

And the Philadelphia native plays Junior in his 20s.

With computer graphics, there is no secret to how a filmmaker could pull off this feat in 2019.

Hollywood has ample film footage of Smith as a young man from his days as a rapper to his early movies like “Six Degrees of Separation.”

And the visuals of Smith within that 30-year range look O.K.

The graphic do not look superb, but they look O.K.

Unfortunately, moviegoers will see the conclusion of “Gemini Man” coming a mile away.

Nevertheless, the faults of “Gemini Man” do not prevent it from becoming a good action film.

Smith is an Academy Award nominated actor with an almost 30 year acting resume for a reason.

Owen is one of the best in the game as well.

But Winstead impresses in “Gemini Man” alongside Smith as well.

Although she does not boast the lengthy resume of her counterparts, she boasts equal ability and it shows in “Gemini Man.”

Most importantly, “Gemini Man” will appeal to the conspiracy theorists of the world, and nowadays the world has many.

Currently, several conspiracy theories have gained attention from the murder of Joshua Brown who testified against former Dallas police officer Amber Guyger recently in the murder of Botham Jean to the suicide of alleged child molester and billionaire, Jeffrey Epstein.

People hardly ever trust government and it seems that in 2019 people have even less trust in the government of the United States.

So “Gemini Man” begs the question, does America have paid assassins?

And does everything the government tells us about foreigners ring true?

The answer is obviously not.

But one thing is evident after watching “Gemini Man.”

Smith still has some fuel left in the tank to make a good Hollywood action flick.