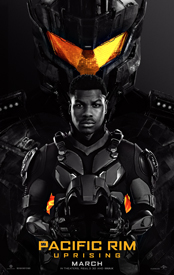 Evil attempts to dominate or destroy the world.

Good tries to fight back evil.

In the end, good often triumphs over evil.

That is the end of the movie.

Despite the same formulaic approach since the inception of the movie industry, action films usually have to accomplish certain things to satisfy action fans.

First, the graphics have to mesmerize.

Second, the fighting scenes have to cause massive havoc.

And third, at least the lead character has to contain enough charisma to bring much needed humor and charm to the film.

And despite falling victim to the Hollywood formula, “Pacific Rim: Uprising” benefits from destructive fighting scenes, dope graphics and a charismatic performance by John Boyega (“Detroit”).

In the past, the Kaiju (robots from another world) invaded Earth causing mass destruction and many fatalities.

Somehow, the Kaiju have been able to leave their realm and penetrate Earth in an act of war.

In the previous “Pacific Rim,” Stacker Pentecost (Idris Elba, “Molly’s Game”) led a resistance with his own robots called Jaegers.

The residents of Earth were able to hold back the Kaiju initially, but many people on Earth know that another war is inevitable.

Many wonder why the Kaiju came in the first place without finishing off the Earthlings.

It is as if the Kaiju only wanted to make their presence known to strike fear amongst the people of the Earth.

Although the Kaiju did not destroy Earth at first, they forever changed Earth.

The planet has become a free for all, with crime running rampant throughout the streets.

One almost has to steal or hustle in some way just to eat.

The government does not even seem to care about the lawlessness.

They only care about one crime and that is stealing the parts needed to create a Jaeger.

And when law enforcement officials find Stacker’s son, Jake Pentecost (Boyega) and Amara Namani (Cailee Spaeny) in possession of a Jaeger, they force them to join the government’s training program instead of sending them off to prison.

What follows in “Pacific Rim: Uprising” is the usual action film upheaval.

However, Boyega and to a lesser degree Spaeny, carry the film with their humor and charm.

After seeing Boyega in serious dramatic roles like the depressing and anger-inducing “Detroit,” it is great to see him pick a movie that shows a different side of his personality.

Furthermore, Scott Eastwood does a decent job as Nate Lambert, Jake’s colleague, nemesis and competitor for the attention of a special young lady.

Eastwood is not his father on the big screen because actually few have the star power of Clint Eastwood.

But he is a decent enough actor to thrive in action films like “Pacific Rim Uprising.”

However, the star of “Pacific Rim: Uprising” is obviously Boyega because he breathes life into a formulaic movie and proves that he has enough chops to become a certified movie star.