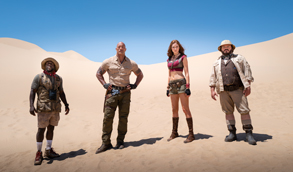 Kevin Hart is known as a charming little comedian.

He has made a great career out of making fun of his short stature.

Now, he has another charming little movie that children will particularly enjoy, not to mention a lot of adults, with “Jumanji: The Next Level.”

In the movie “Jumanji: The Next Level,” Spencer (Alex Wolff) has not been himself since going off to college.

He drifts off into space while at his job.

He clumsily bumps into pedestrians constantly on the streets of New York City.

And he does not really know the status of his long distance relationship with his girlfriend, Martha (Morgan Turner).

Nevertheless, he is looking forward to returning home to hook up with old friends, including Martha, despite the awkwardness that surely will ensue.

But Spencer’s discomfort continues when he finally makes it home after damaging his luggage on the way out of New York City.

He has a new roommate that he has to get accustomed to sharing space with.

No, he does not have a new roommate in the college dormitory.

Spencer has a new roommate at his mother’s house.

He has to share twin beds with his grandfather Eddie (Danny DeVito) who cannot stay alone at his apartment because he just underwent hip surgery.

While Eddie thinks he is in perfect shape, walking and standing becomes a chore f0r the stubborn old man as a result of the surgery.

Eddie is stubborn like many grandfathers because with age usually comes wisdom.

Although Spencer has taken a break from his relationship with Martha, Eddie informs his grandson that he needs to enjoy these years because they are the best years of his life.

Eddie warns Spencer that it is all down hill from here, as he gets older.

Although he has no problem with Spencer hanging out with old friends and old flames, he hates the restaurant choice that Spencer’s friends pick for their reunion.

The gang will all meet up at a restaurant called Nora’s.

However, when Martha, Fridge and Bethany show up at Nora’s Diner, formerly known as Milo and Eddie’s, Spencer is a no show.

The gang shows up at Spencer’s mother’s (Marin Hinkle) house to check on their friend, but only find Milo (Danny Glover) and Eddie holding down the fort.

Fearing the dreaded inevitable, the gang sneaks away from Milo and Eddie to see if Spencer is down in his mother’s basement playing the video game that they vowed never to partake in again.

Seeing the “Jumanji” game out with the television on, the group knows that Spencer has gone back in and in order to get him out of the video game safely, they will have to go in too.

In “Jumanji: The Next Level,” an evil warlord has stolen a precious red jewel that controls the livelihood of everyone that lives in Jumanji.

With the jewel in the wrong hands, and not facing the sun, the land has dried up and the existence of all mankind is in danger.

The gang has to find a way to get that jewel from the neck of the evil warlord before their three lives each expire.

But the problem is not just the game itself.

The biggest problem is the avatar that each person has to embody.

Fridge has come back in an avatar that looks like Jack Black (“Jumanji: Welcome to the Jungle”).

For a star football player like Fridge, having to become a pudgy map expert is an extreme insult.

But for some reason Bethany (Madison Iseman) has not shown up in Jumanji like the rest of her friends.

Accidentally, Eddie and Milo have shown up in Jumanji instead of Bethany.

When Grandpa Eddie says that he has not had a physique like Johnson’s since…Milo responds since never.

He has never been in great shape like that despite what Eddie says.

Unfortunately, he still sounds like an old man with a lisp.

Milo is now a zoologist.

The problem with Milo’s new profession is that he still speaks too slowly and takes too long to make his point, a constant criticism that Eddie has of his former best friend.

That slow pace leads to some fast problems in the form of wild animals like the horde of ostriches that do not particularly like the new inhabitants of Jumanji.

“Jumanji” remains an enjoyable franchise because of the uniqueness of real people getting stuck in a video game world.

Furthermore, with Hart playing an older man, he abandons the manic caricature of a personality that he plays in many of his movies.

Additionally, it is great to see such a great thespian like Glover taking on lighter roles this late in his career.

Moviegoers know he can pull off the seriously dramatic roles like in “The Color Purple,” as well as the action rolls like “Lethal Weapon.”

But over the last couple of years, Glover seems to relish the roles that show his fun side like in “The Dead Don’t Die” and “Sorry to Bother You.”

Lastly, “Jumanji: The Next Level” shows more uniqueness by having multiple actors playing the same character, and others as well.

Unfortunately, “Jumanji: The Next Level” cannot shed its juvenile feel.

Nevertheless, “Jumanji: The Next Level” has no intention of appearing like a serious film.

The film is enjoyable and charming and not a waste of time for moviegoers of all age groups.