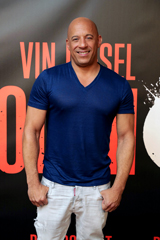 Vin Diesel poses for the camera at the press junket photo call for “Bloodshot” at The London West Hollywood (Photo Credit: Eric Charbonneau).

Eddie Kendricks of The Temptations once sang, “It was just my imagination, running away with me.”

Although Kendricks sang about a romance that did not exist, as a matter of fact that woman did not even know him, one’s imagination can get a person in serious trouble.

That is especially true if it is a life and death situation or situations like in “Bloodshot.”

In “Bloodshot,” Ray Garrison (Vin Diesel, “Riddick”) is adamant about seeking retribution for the people responsible for brutally killing his beloved wife Gina Garrison (Tallulah Riley, “Thor: The Dark World”) in front of his face.

But what if Ray is imagining the whole thing?

If so, he is not only putting himself and the alleged murderers in danger, he is also placing innocent civilians in danger as well.

The American military is filled with heroes and heroines who put their lives on the line to protect Americans at home and people throughout the world.

In “Bloodshot,” Ray and his fellow soldiers get some intelligence from someone in Mombasa, Kenya about hostages trapped in a home.

Although Ray and his crew have help from fellow soldiers in the air in case something out of the ordinary happens before they enter the house to rescue the hostages, no one truly knows what can happen after busting into someone’s home unannounced.

Nevertheless, American heroes take that risk everyday because they have a call to serve others, not just themselves.

Ray leads the crew into the Kenyan home and instant gunfire greets them.

The Americans return gunfire before sweeping the home for any hostages and hostage takers.

Ray enters a bedroom where a Kenyan hostage has an American at gunpoint.

Although Ray has more ammunition than the hostage taker, he cannot take any chances with the barrel of a pistol pointed at the head of an innocent American.

The hostage taker has some demands for Ray and the rest of the American soldiers closing in on the house.

He demands that Ray put down his weapon, immediately.

But in order for Ray to make good on the hostage taker’s demands, he has to use a nearby telephone.

The hostage taker obliges, directing Ray towards a nearby telephone.

But as he looks away from Ray and towards the telephone, Ray kills the hostage taker with a pistol he has on his side.

Ray frees the hostage and returns to the military base in Italy a hero.

The hero has earned the praise.

Even more so, Ray has earned a much-needed Italian vacation with his lovely wife.

Unfortunately, Ray has obviously made some enemies with his rescue mission in Kenya.

While Ray sleeps, Gina goes out alone to fetch the couple some breakfast.

Although Ray does not wake up to his lovely wife in their hotel room, he does wake up to criminals intent on taking his life.

He manages to fight them off, but is drugged trying to get out of his hotel room by a man with a needle of some sort in the hotel hallway.

Ray wakes up to find himself bound and gagged by kidnappers.

The kidnappers demand that Ray tell them how they got the information about the hostages in Kenya.

The abductors give Ray more encouragement to talk when they inform him that they have kidnapped Gina too.

If Ray does not tell them the information that they want, they will kill Gina, as well as Ray.

Not having any information to give the kidnappers, Ray has to watch as the thugs murder his beloved Gina in front of his own eyes.

Any normal person would want revenge after someone does something like that to a person so close to them.

Although only one man pulled the trigger, he had many accomplices that helped him kidnap and kill Gina.

Therefore, Ray has a lot of potential victims to mow down one by one to get some get back, revenge or payback to quote the “Godfather of Soul,” James Brown.

There is only one problem, and The Temptations alluded to it.

What if it is just his imagination running away with him?

Furthermore, what if Ray is dealing with something more sinister than he can even imagine?

Diesel has made himself a star by knowing his strengths and his weaknesses.

He never tries to do anything outside of his capabilities.

But the breakout star of “Bloodshot” is not Diesel, obviously, because he has done his thing for years with countless action movies.

However, the star of “Bloodshot” is Lamorne Morris (“Yesterday” and “Jumanji: The Next Level”), who plays Wilfred Wiggins, a tech and computer genius with a British accent.

Wiggins brings a naïve and intelligent charm to “Bloodshot,” almost as if to balance out the violence.

And there is a lot of violence in “Bloodshot” as to be expected from an action film starring Diesel.

He has found his own style and persona and he owns that lane that he operates in.

And it is nobody’s imagination that Diesel continues to make hit action films for the moviegoers who live to see fighting scenes, car chases and constant pistol play.