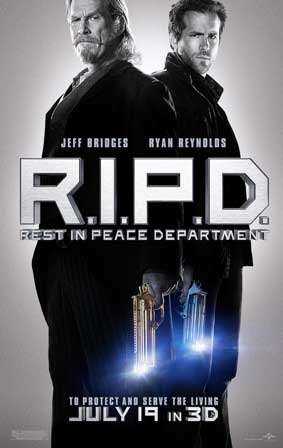 However, what is missing from his life is an excessive amount of money, which would allow him to give his wife Julia (Stephanie Szostack) the life he thinks she deserves.  In “R.I.P.D.,” that desire for the better things in life, leads Nick to the underworld and away from what is really important in his life.

While making a bust with his partner in law enforcement Hayes (Kevin Bacon), the two stumble across a stash of gold.  Instead of turning the gold into their superiors, Nick and Hayes keep the stash of gold, with Nick burying his portion under a newly planted orange tree.

Nick sees the gold as his opportunity to provide a great life for Julia, but when she informs him that she only cares about him and not the material things, he tells Hayes that he wants to turn his stash in.  After a drug bust, Hayes shoots and kills Nick because of his new found honesty and the threat that he poses to Hayes’ career.

Instead of going to the afterlife, Nick is allowed to join the R.I.P.D. or Rest in Peace Department, a police department that is designed to catch “dead-os;” those who somehow escaped judgment after their death and remained on Earth.

The main goal of the “dead-os” is to capture all of the gold that Nick and Hayes confiscated from their arrest and to use it to reverse eternal judgment, returning the dead to Earth to rule in perpetuity.

“R.I.P.D.” benefits from gorgeous special effects.  The fact that “R.I.P.D.” is filmed in 3D really makes one feel like they are a part of the action.

The fighting scenes between the R.I.P.D. and the “dead-os” are beautifully created and Jeff Bridges provides some amusing moments in his role as Nick’s R.I.P.D. partner Roy.

Roy’s longevity with the Rest in Peace Department allows him to have a beautiful woman as his avatar, while Nick is stuck with the avatar of an old and creepy looking Chinese man.

Unfortunately, the compliments for “R.I.P.D.” stop there.

Many action movies are supposed to be unrealistic and a way for audiences to take a break from reality.  However, the plot in this film is too far-fetched to enjoy.

Reynolds, Bacon and others do not impress as actors and the script provides very little help for them.

Buried deep under the action scenes is Nick’s love for his wife Julia, and how he is determined to not even let death keep him away from her.  In many ways, his love for her is reminiscent of Patrick Swayze’s love for Demi Moore in “Ghosts.”

While the latter succeeds in becoming a beautiful story of love lost as a result of needless violence, the former fails because the far-fetched storyline and subpar acting performances by Reynolds and company.