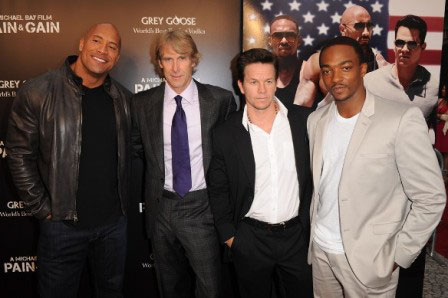 Often, a movie’s trailer is the best thing about the film.  The trailer includes the best parts of the film and when one finally sees it, they leave highly disappointed.  The opposite proves true for the Pain & Gain film, which stars Mark Wahlberg, Dwayne “The Rock” Johnson and Anthony Mackie.

Daniel Lugo (Wahlberg) is a man with much ambition. As motivational speaker Johnny Wu (Ken Jeong) would say, he is a “do’er, not a don’ter.”

The bodybuilder disdains people with no motivation and discipline, and he disdains his place on the socioeconomic ladder, unable to provide the life he wants for himself and therefore unable to get the girls that he likes.

What Daniel lacks in material possessions he makes up for in will.  He is able to turn John’s (Rob Corddry) gym from an old folk’s gym, where in his words old ladies are about to croak to the “it” gym in Miami for bodybuilders and beautiful women.  His ingenuity even leads to the gym offering special discounts to female exotic dancers.

Nevertheless, the more success the gym enjoys, the more despondent he becomes about his lot in life.

The beautiful women at the gym ignore him and the wealthy clients he trains, like Victor Kershaw (Tony Shalhoub) make him want to go to any means to have the lifestyle that they enjoy, even if that means kidnapping and extortion.

Daniel devises the dumbest kidnapping and extortion scheme in the history of Western civilization, a plan to get Victor to sign over all of his assets to him and his crew of lovable losers, Paul (Johnson) and Adrian (Mackie).

Paul is the strongest of the crew physically, but the weakest mentally.  He spent time in prison, where he converted to Christianity, and he is more concerned with saving Victor’s soul, then saving his own behind from being incarcerated again.

Unfortunately, the Pain & Gain film trailer does not give it justice.  Luckily, they saved the most comedic scenes of the film for the actual theatrical version and not the preview.  The Pain & Gain film is absolutely riotously hilarious.

Moviegoers have grown accustomed to seeing Wahlberg and Johnson in action roles and Mackie in dramatic roles, but the three thespians show their comedic talents and comedic timing are impeccable.

When Daniel moves into a palatial palace on the beach, he tries to mentor the neighborhood children and admits to one of the children that he could be his stepfather by the end of the week because his mom has the “hots” for him.

During a neighborhood watch meeting that the trio of would-be criminals host, their stripper friend Sorina (Bar Paly) acts as a rape victim and when they ask for volunteers to play the rapist, all of the men volunteer much to the dismay of their wives.  The chosen volunteer has to explain to his wife that he had to touch Sorina’s bottom because he had to sexually assault her.

The only thing that is unrealistic about the Pain & Gain film was the fact that it was supposedly based on a true story from the mid 1990s, but it is hard to believe that any criminals could be as incompetent as Daniel, Paul and Adrian.

Furthermore, the beginning of the Pain & Gain film gives too much attention to the sport of bodybuilding because the action does not heat up until the trio enters a life of crime.

Although they are definitely operating outside of the law, one almost feels sorry for them and hopes that they do not face any consequences and repercussions for their ill-fated criminal plans.

Despite the fact that the trailer for the Pain & Gain film does the actual film no favors in highlighting how good the movie actually is, it is to the audience’s gain that they give it a chance, the trailer notwithstanding.