Movie Review: ‘The Hunt’ Painful to Watch At Times 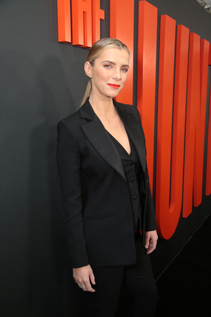 Betty Gilpin attends a special screening of “The Hunt” at the ArcLight in Hollywood, Calif. on March 9 (Photo Credit: Benjamin Shmikler/ABImages).

It is good to see Hollywood poke fun at it itself with full satirical splendor.

Sometimes, Middle America turns its television off when liberal celebrities give award acceptance speeches criticizing those on the right and advocating for leftist politics.

But what if a movie took the leftist approach way past left field and out of the park, making it a sport to not just piss off conservative Americans, but to hunt them down for being the “deplorables” that Secretary Hillary Rodham Clinton said they were?

“The Hunt” eliminates the “if” in the aforementioned equation.

And while “The Hunt” is completely harmless, although some politically obsessed people might not find it funny because some take everything so seriously, it is still painful to watch at times.

“The Hunt” is not painful to watch because it could offend some on the right or the left because it equally offends.

Honestly, offending people is sometimes the first step to getting them to see things from a different perspective.

But “The Hunt” is painful to watch because the film is kind of silly and sophomoric even though it deals with some current hot button topics in a sometimes-humorous way such as illegal immigration, cultural appropriation and White privilege.

The hunt begins a little early on a strange plane ride full of passengers that could be considered deplorable too.

However, when the hunt does get going, bloodshed and guts will get spilled all over the screen.

When the hunt is about to commence, 11 strangers find themselves basically gagged and bound on a big piece of land somewhere in Middle of Nowhere, Arkansas.

No one can really speak because the apparatus used to gag his or her mouths is locked making it impossible to communicate and making it very difficult to even breathe.

Luckily, a key is found to ungag everyone’s mouths.

Finding even more luck, one of the 11 strangers stumbles upon a locked wooden crate.

While some of the other strangers urge him not to pry the crate open, even running away from the crate in distress, the man still opens the crate.

What comes out initially eases the fears of many because it is a harmless pig who would have more to fear than the strangers if the strangers liked everything on the pig “from the roota to the toota” to quote the late, great comedian, John Witherspoon.

But what comes out of the crate next is something that gets the strangers worried.

A large assortment of weapons from knives to pistols to machine guns come rolling out of the wooden crate.

The strangers realize that their lives are in danger if someone gave them weapons to protect themselves.

But before the strangers can distribute the weapons to all of their new comrades, they begin taking incoming sniper fire.

When a few of the former strangers, Crystal (Betty Gilpin, “Stuber”), Don (Wayne Duvall, “The Kitchen”) and Gary (Ethan Suplee, “Motherless Brooklyn”) escape the initial onslaught they have to figure out who is out to kill the 11 strangers and why.

Amongst conspiracy theorists across the country like bloggers and podcasters, something called Manorgate has been an old wives’ tale for a long time.

In Manorgate, the leftist elite hunt down delporables, which consist of regular Americans to those who like Fox News’ Sean Hannity, and they gun them down to rid the world of their ignorance and stupidity.

While the elites sip champagne and nibble on caviar on airplanes in first class, the deplorables have no class whatsoever.

The deplorables believe everything that right-wing radio personalities and bloggers tell them without doing their own critical thinking.

Or do Black people prefer the term African-American instead?

But that community suffered for 400 years under slavery and segregation so they deserve some love and understanding.

Those deplorables are even pro-life, if a person could even fathom why someone would be pro-life.

In other words, people like that have to be purged, even if Manorgate is a myth and not reality.

And although the elites look at the deplorables as commoners with no intellect, people should never judge books by their covers because unpredictability is a son of a gun.

Crystal is more of a bada$$ than the famous rapper, Boosie Badazz.

Although most deplorables probably do not possess much attention because their parents might be first cousins, Crystal is brilliant on the battlefield.

Crystal has to use her ingenuity and military skills to save her life and the lives of her new comrades before finding out who is behind the hunt and why they are hunting the 11 former strangers.

Unfortunately, Gilpin is one of the only bright spots of “The Hunt.”

The other bright spot of “The Hunt” is the sometimes-clever dialogue.

But other than that, “The Hunt” is a waste of a metaphorical deer lease because the hunt does not produce much big game.

However, “The Hunt” does not take itself too seriously and that is a good thing.

“The Hunt” is just a movie that pokes fun at Hollywood politics.

Furthermore, “The Hunt” satirizes how crazy and polarizing America has gotten as a result of politics.

The current political climate makes some people think that if a person disagrees with their politics then that person must be a horrible individual.

When in actuality, politics are individual truths, meaning subjective to a person’s beliefs and experiences, and often not something worth dying for and never something worth killing for.