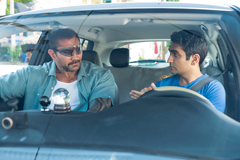 It’s funny how much can change in a week’s time let alone a few years.

Back in the day, NBA players went to the Los Angeles Clippers to see their careers die.

Now, thanks to Kawhi Leonard and Paul George, Los Angeles’ moribund basketball franchise has experienced a resurrection from the dead like Lazarus and Jesus Christ.

But in the comedy “Stuber,” filmed before the miraculous rise from the dead for the Clippers, players and cops still came to the Staples Center in Los Angeles to see their careers die.

Unfortunately for Sara (Karen Gillan, “Avengers: Infinity War”) in “Stuber,” she dies at the hands of an elusive criminal during the aftermath of a Clippers game.

For her partner on the police force Vic (Dave Bautista, “Hotel Artemis”), the death of Sara hits extremely close to home.

Maybe, if Vic had been a little quicker, Sara might not have met such a quick and untimely demise.

Although Vic’s superiors want him to relax and take some time off from the force, he cannot get Sara’s death out of his system.

While working desk duty, he still obsesses over the case.

Even when the Feds take over the case of Sara’s murder and the drug traffickers allegedly behind her death, Vic still works his leads and angles to solve the case and bring the cop killer to justice.

When he gets a lead from a good friend, Vic decides to drive to a location even though he cannot see.

In “Stuber,” Vic yells at pedestrians on sidewalks to get out of the way so that he can get where he is going.

He even knocks over a tree with his automobile in his desperate pursuit of criminals.

On the other hand, Stu (Kumail Nanjiani) has his own automobile issues.

His thankless job at a sporting goods store does not quite pay the bills.

Therefore, Stu has to get a side gig as an Uber driver.

His boss at the sporting goods store jokingly calls him “Stuber” because of his name and second profession.

His boss even calls Stu while Stu is still in the parking lot after his shift at the sporting goods store, so that he can get an Uber ride to see his girlfriends.

Talk about abuse of power.

Stu’s boss Richie (Jimmy Tatro, “Boo: A Madea Halloween”) calls Stu his best friend but treats him like his worst enemy or at least his personal punching bag.

But when Vic meets Stu, he treats Stu a little differently than Richie does.

Vic at least appreciates that Stu can see.

Since he can see, he can drive.

And since Stu is affectionately known as “Stuber,” Vic now has his own personal chauffeur to take down the bad guys of Los Angeles.

After a passenger gets dropped off to their destination, the fare is completed.

There is no such thing as round-trip Uber or taxicab rides.

But money talks, and nonsense walks.

The diminutive Stu is no match for the brawny Vic.

Therefore, he has no choice but to become Vic’s personal chauffeur especially when Vic pulls several tricks on Stu to persuade him to keep the job like keeping his car keys from him.

He has become a financial partner in a gym called Spinster with his former friend with benefits colleague.

Although Stu believes in the new business venture, he really believes that his new business partner is his soul mate despite having some stiff competition from a Los Angeles Lakers star.

How does a man compete for a woman when he works at a sporting goods store and her “boo” actually plays professional sports?

But after Stu’s dangerous adventures with his new BFF, maybe his secret crush will view him in a different light.

She definitely views him differently when she FaceTimes him while Stu is at a male strip club.

The locale of the FaceTime gives her a view of their friendship that she definitely did not expect.

And Stu’s eventual transformation in “Stuber” definitely qualifies as unexpected.

“Stuber” is a great combination of factors for a buddy comedy.

It has its slapstick or sophomoric humor.

But “Stuber” also has very clever dialogue especially the dialogue of Stu.

When Vic takes him to a run down neighborhood in Compton, Calif., Stu causally states that gentrification has not touched the neighborhood at all.

And because of the way the neighborhood looks visually, that is the farthest thing from a compliment that a community could receive.

What “Stuber” truly benefits from is Stu.

Nanjiani portrays Stu in such a laidback and unassuming humorous way, that the titular character basically steals the show singlehandedly.

Stu tells the most hilarious stories and jokes with such a serious look on his face that his demeanor makes the dialogue funny by itself.

Nevertheless, movie critics who cannot separate true cinema from a truly good time might not see the ingenuity and the great dialogue in “Stuber.”

Everyone is entitled to his or her own opinion so to each his own.

But those who want to see Hollywood resurrect a true feel-good movie that will have moviegoers leaving with a grin on their face then catch a ride with “Stuber.”