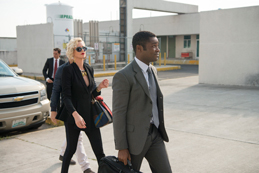 Stay off the Weed

ESPN analyst Stephen A. Smith loves to say, “Stay off the weeeeeeed” when discussing an athlete’s predilection to marijuana.

And although medicinal and recreational marijuana is legal in some jurisdictions that does not mean problems do not still exist when it comes to weed.

In “Gringo,” Harold Soyinka (David Oyelowo) finds out unwittingly how dangerous weed can be when the clean cut pharmaceutical employee finds himself in the middle of a war for a marijuana pill. The war is between the drug cartels of Mexico, low-level hustlers from America and the pharmaceutical company owned by one of his closest friends.

According to Dictionary.com, gringo is “a term used in Latin America or Spain to refer to a foreigner, especially one of U.S. or British descent (sometimes used facetiously).”

Unfortunately for Harold, he is the gringo that the Mexican cartels refer to in the film “Gringo,” when he finds himself in the most precarious position of his life.

Harold, a descendant of Nigeria, believes that he is living the American dream.

He has a beautiful wife, Bonnie (Thandie Newton).

The pharmaceutical company executive has a well-paying job working for his friend’s company, Permetheum.

With all of that going for him, what could possibly go wrong for Harold?

It is a good thing that you asked.

First of all, his marriage has cracks in it.

His friendship with his boss Richard Rusk (Joel Edgerton) has cracks in it.

The company that he works for is not as stable as it appears.

And his bank accounts all contain a negative balance.

Despite all of Harold’s setbacks, he is still naively innocent to what is happening around him.

He still trusts his wife.

And he still believes that the company is in good shape despite the rumors he has heard.

That façade is shattered when he finds himself in a middle of a drug war in the barrios of Mexico.

Despite the fact that some parts of “Gringo” are predictable and obvious from jump street, Oyelowo’s quirky, innocent and offbeat performance carries the movie, and allows the “Selma” thespian to show a much lighter side of his talent.

The writing is extremely good like the obsession over whether “Let it Be” or “Sgt. Pepper’s Lonely Hearts Club Band” was The Beatles’ best album.

Charlize Theron is sexy in an untrustworthy “Basic Instinct” way in which she channels her inner Sharon Stone.

Even young Paris Jackson (yes, Michael Jackson’s daughter) is convincing in a sultry, stoner kind of way in her cameo appearance in “Gringo.”

The late “King of Pop” would definitely be proud.

However, he might not be too fond of the weed and would have suggested that people in the film refrain from “illegal” drugs.

But weed addiction is not too easy to kick whether one is addicted to the high or one is high off the high profits that come from trafficking the drug.

And with weed becoming legal, “Gringo” shows that it will be hard to keep the street pharmacists and the pharmaceutical companies off of each other as they fight for a changing industry.