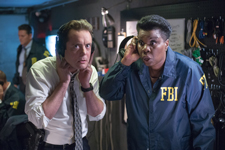 Women are better actors than men and that is not a sexist statement.

Some women are so good at acting in real life that they can convince a man, who knows he has no chance with them, that they love him and subsequently get him to do anything they want him to do.

In Eddie Murphy’s “Harlem Nights,” Sunshine (Lela Rochon) convinced Richie Vento (Vic Polizos) to leave his wife and kids, which was a total set up job.

And in “Masterminds,” Kelly (Kristen Wiig) convinces David Ghantt (Zach Galifianakis) to leave his fiancé and rob the armored car service that he works for.

The outcome is hilariously predictable, making “Masterminds” like a hillbilly version of “Harlem Nights.”

In “Masterminds,” David is at a crossroads in his life when he should not be.

He is set to marry his dead cousin’s ex-girlfriend Jandice (Kate McKinnon) soon.

The couple has just completed “beautiful” engagement photos at their trailer park.

And David has a steady job as an armored car driver for Loomis Fargo.

However, his life has absolutely no excitement whatsoever.

When David took the job at Loomis Fargo, he envisioned shootouts with robbers.

Instead, he received monotony.

Everyday is the same.

But when he begins working with Kelly all of that changes.

She floats the idea of robbing Loomis Fargo, but David is totally against it, afraid that he might lose his “riveting” job.

However, when Kelly convinces David that she loves him (143), the gullible gentleman is ready to leave his former life behind by stealing millions and escaping to another country with a woman that is totally out of his league.

Unfortunately, David soon realizes he has been suckered and he must devise a method of revenge for his naiveté.

Galifianakis has mastered the art of playing dumb characters.

It might be understandable to suggest that he is not acting.   That shade was thrown in good humor Zach!

David locks himself into the armored car during the attempted heist.

He somehow misses every target during shooting practice at the gun range.  But somehow manages to shoot himself in the buttocks, which was not one of his intended targets.

Although Galifianakis is hilarious, he gets help from his equally hilarious buddies.

The idea of Sudeikis as a believable hit man is funny by itself.

And Leslie Jones stars as the Detective in charge of solving the armored car robbery.

Or to paraphrase Kelly, the Detective is just a hard working man trying to do his job.

The Detective obviously is upset that Kelly mistakes her for a dude.

However, the fact that Kelly is able to convince David that she is actually in love with him speaks to the power women have over men.

And to get David to rob his own company shows the power that love, lust or infatuation can have over a gullible man.

The fact that David is a country hillbilly from the trailer park, just makes it that much more hilarious.