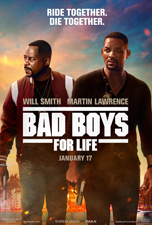 Bronze Medal Winner: ‘Bad Boys For Life’ Does Nothing to Damage Iconic Brand

Does “Bad Boys for Life” equal the first two installments of the “Bad Boys” movie franchise?

In the meantime and in between time, “Bad Boys for Life” adds more heart than the first two installments combined as Martin Lawrence delivers his best acting performance of the trilogy.

In “Bad Boys for Life,” Detective Marcus Burnett (Lawrence) still wants to retire like he has wanted to do since the inception of the franchise.

Marcus has to think about his wife, his children and a new grandchild on the way.

The scary cop’s only daughter Megan Burnett (Bianca Bethune) is set to deliver her first child at any moment.

Audiences will love who the baby daddy is.

As a youngster, the baby daddy looked a lot like Ludacris in some folks’ minds.

On the contrary, Detective Mike Lowrey (Will Smith) still only has to consider himself when making daredevil decisions that put everyone else in jeopardy from cops to civilians.

Mike and Marcus are still driving Captain Howard (Joe Pantoliano) completely mad as a result of their careless and violent antics.

It is a miracle that “Cap” has not had a massive heart attack or stroke dealing with the self-described bad boys of the Miami Police Department.

But as in the previous “Bad Boys” installments, a serious crime strikes the streets of Miami and Marcus and Mike take it upon themselves to solve it even if “Cap” puts another team, like AMMO, in charge of the investigation.

At the beginning of “Bad Boys for Life,” Isabel Aretas (Kate del Castillo), the widow of a Mexican drug kingpin breaks out of prison in brutal fashion.

Before she went behind the fences, she left a young son behind to grow up without his parents.

Nevertheless, she still managed to teach him how to become a brutal assassin and future kingpin of a cartel.

His skills help to free her from bondage, and the escape allows her to return to the streets to orchestrate a plan for revenge.

Her mission is to kill everyone associated with sending her to prison and bringing down her late husband’s multi-million dollar drug cartel.

She informs her son about some money that his father left behind.

And she gives him a kill list, which includes judges, snitches, prosecutors and even Detective Mike Lowrey.

The drug empress has one requirement for her son before he begins his killing spree.

She wants him to leave Mike’s murder for last so that he can suffer by watching the murders of all of those that he worked with on her criminal case years earlier.

Because Mike is a part of the criminal case, “Cap” does not want him to participate in the investigation.

However, “Cap” does allow Mike to work as a consultant to AMMO as they lead the investigation into the revived murderous Mexican drug cartel.

And fans of the “Bad Boys” franchise know what it means to have Mike involved in an investigation.

The brother usually gets results, but at what cost?

Some “Bad Boys for Life” scenes will truly upset diehard fans of the buddy cop movies.

But despite the sentimental tone struck in “Bad Boys for Life,” the movie still has its fun moments and memorable cameos like an appearance from one of Miami’s favorite sons, D.J. Khaled.

The super-producer and D.J. even helms the “Bad Boys for Life” soundtrack on his We The Best record label.

But like the movie, the soundtrack does not quite measure up to its predecessors, namely the soundtrack to “Bad Boys II,” which came via Sean “Diddy” Combs’ record label, Bad Boy Entertainment.

Unfortunately, former basketball star John Salley does not return as the nerdy and humorous computer nerd from “Bad Boys” and “Bad Boys II.”

But with Lawrence in the fold, “Bad Boys for Life” definitely has enough hilarious moments.

Although Mike Lowrey will always be Mike Lowrey, Marcus loves to let Mike know how old he really is.

When Mike tells Marcus he wants to turn up, Marcus responds by asking him if he is 20 years old?

At Mike’s age, Marcus tells him he needs to turn that (expletive) off.

Furthermore, “Bad Boys for Life” does not have enough of Marcus’ wife Teresa (Teresa Randle) who still does not like the shenanigans that Mike gets her husband in especially now since they are grandparents.

But “Bad Boys for Life” has Smith and Lawrence and that should be sufficient for this third place winner in the trilogy.

Nevertheless, third place is not a bad finish for “Bad Boys for Life.”

The third installment just had some huge shoes to fill.

Think about it like this, if a person wins a bronze medal for third place in a track meet would they get upset if the gold medal went to Usain Bolt and the silver medal went to Carl Lewis?

They absolutely should not be upset because they would know that they stood in the presence of greatness.

Therefore, “Bad Boys for Life” does not win the gold or silver medal.

But a bronze medal still represents greatness and immortality.