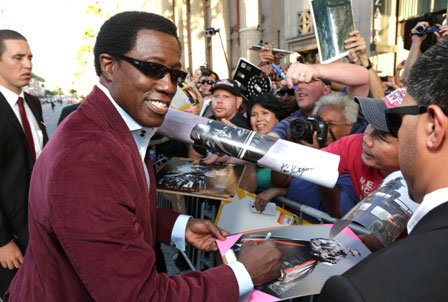 Wesley Snipes arrives at the Los Angeles premiere of "The Expendables 3" in Hollywood, Calif. on Aug.11 (Photo Credit: Eric Charbonneau/Invision for Lionsgate/AP Images).

It is good when someone can admit past mistakes and still find the humor in a negative predicament.

Wesley Snipes had been at the top of Hollywood’s Mount Rushmore for so many decades that he might have taken success and celebrity for granted.

Often, the entertainment business has a short memory and will move on without you, but luckily for Snipes he found a liberator in the form of Sylvester Stallone who was willing to break him out of the grasp of the prison system, both on screen and off.

In “The Expendables 3,” Barney Ross (Stallone) and his usual suspects of mercenaries break Doc (Snipes) out of a heavily guarded prison that is not even legally on the books.

When other members of the Expendables ask Doc why he was incarcerated, he responds with a laugh stating that he was there for tax evasion, which is a personal jab at himself and his time in prison.

Barney wants Doc’s expertise in order to stop a bomb shipment that is coming through.

Despite decent intelligence from superiors, Barney realizes that the person that they believe is responsible for the shipment is not the culprit at all.

Former Expendable founder Stonebanks (Mel Gibson), who is believed to be dead, is the true mastermind behind the bomb shipment and he has a full army of soldiers protecting his every move.

When the Expendables attack Stonebanks and his comrades, it leads to mass causalities and attrition in their ranks.

Barney quickly realizes that his old school methodology will not work against an evil mastermind like Stonebanks.

Therefore when Drummer (Harrison Ford) tasks him with capturing Stonebanks alive so that he can stand trial for his crimes, Barney comes to the realization that he needs new Expendables for a brand new world of crime.

“The Expendables 3” is an enjoyable 126-minute ride, nothing spectacular or unique, but nothing disastrously bad either.

The final fighting scenes are very good, but it’s of the usual action film variety, which makes it hard for it to stand out.

Unfortunately, that is the dilemma for many action films, especially sequels that get a third installment like this popular franchise.

Luckily, Snipes has never been just an action film star.  His training at the New York School of the Performing Arts always allows him to be more than just a physical actor and he proves his worth in “The Expendables 3.”

His wisecracking jokes are only upstaged by Antonio Banderas who plays Galgo, the motor mouth of the crew who has been fired from other missions probably because he talked his allies to the brink of death with his rhetoric.

Nevertheless, great performances by Snipes and Banderas cannot make up for the fact that the film is status quo and cliché at times.

Like many other action flicks, the players in “The Expendables 3” inexplicably crack jokes in the middle of fighting for their lives.  I have always been of the mindset that if my life is on the line, it’s no joking matter.

Furthermore, some of the night driving scenes look unrealistic because of bad green-screen usage.

Regardless, “The Expendables 3” is a resurrection for Snipes, who Stallone originally wanted to cast in the role of Caesar (Terry Crews).

His career, like his freedom temporarily died in 2010 when he was sentenced to prison time for tax evasion.  But a few years later, his career has been resurrected proving that even Hollywood believes in redemption and forgiveness.