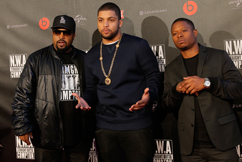 From One Oscar to Another

Watching Oscar (Philip Boyd) play Candace (Tika Sumpter) in the season finale of “Tyler Perry’s The Haves and the Have Nots” had me thinking of another Oscar.

The aforementioned season finale had me thinking of Academy librarian Margaret Herrick’s Uncle Oscar, aka the nickname of the Academy Awards.

Although it’s early in the fall movie season, RegalMag.com has already had the pleasure of screening several films that should receive 2016 Academy Award consideration for Best Picture.

Though the Oscar voters may disagree with Regal’s list, one movie will hopefully walk straight outta the Dolby Theatre in Hollywood, Calif. with some hardware in tow.

“Black Mass”—Although N.W.A were mislabeled as gangsta rappers, James “Whitey” Bulger was much more of a gangster than Eazy-E and N.W.A ever were, and his biopic “Black Mass” gives a glimpse of just how much of a savage he was.  Johnny Depp is menacingly brutal in his portrayal of Bulger who, with the help of the FBI, was able to terrorize South Boston and elude arrest for decades.  The film boasts an all-star cast including Benedict Cumberbatch, Kevin Bacon, Dakota Johnson, Cory Stoll and Adam Scott.  Ironically, the filmmakers break the cardinal rule of the underworld and that is snitching.  “Black Mass” is told from the perspective of snitches, including Bulger and his underlings, as they all break the rule of not becoming an informant in an effort to save their own behind.

“Everest”—“Everest” is the most beautiful film contending for a 2016 Academy Award in the Best Picture category.  Filmmakers actually shot the film on location, braving the elements and an enormous mountain in the process.  The result was reality on a totally different level than its competitors.  When the climbers are struggling with the elements, moviegoers will also struggle with the elements.  When the climbers slip and face death in the eye, moviegoers feel the intensity also.  Despite the all-star cast of Jake Gyllenhaal and Josh Brolin, Jason Clarke steals the show so much that Mitchell and Depp should sweat a little when it comes to the Best Actor category.

“Snowden”—Hate him or love him, Edward Snowden changed the world.  No matter one’s political leanings, few probably would say that the government should be able to monitor everyone’s communications from taxpaying United States citizens to foreign leaders but that’s exactly what America was doing.  Thanks to Snowden, those same taxpaying citizens and foreign leaders were made aware of this country’s shenanigans.  Snowden is such a complicated and controversial figure that it will take a great effort by actor Joseph Gordon-Levitt to pull it off and so far preliminary reviews believe that he did just that.

“Concussion”—Will Smith has had some Academy Award worthy performances from “Ali” to “The Pursuit of Happyness,” and “Concussion” is just another gift to add to the repertoire as Terrence Howard would say in “The Best Man.”  Despite the hype about his performance as forensic neuropathologist Bennet Omalu, he probably will end up on the short end of the stick again thanks to Mitchell, Depp and Clarke.  Nevertheless, like “Straight Outta Compton,” “Concussion” is one of the most important films of 2015 because it deals with the controversial topic of CTE in NFL players and the ramifications that concussions can cause long term in athletes.