If Oscars Need to Diversify, Should Black Award Shows Reciprocate? 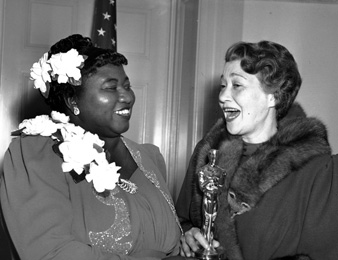 After Hattie McDaniel (left) won the Academy Award for “Gone With the Wind,” it took over 20 years for Sidney Poitier (“Lilies of the Field”) to join her in the history books (Photo Credit: AP Photo).

The Academy Awards became a staple in Hollywood in 1929, honoring the best in cinema behind and in front of the camera.

However, until Hattie McDaniel’s historic win in 1939 for “Gone With the Wind,” and for decades following that watershed moment, the Academy Awards usually honored the best White Americans in cinema, shunning countless classic performances by African-Americans.

Sidney Poitier became the second Black actor to win an Oscar in 1963 for “Lilies of the Field.”

As a result, the African-American community instituted their own award shows like the NAACP Image Awards, Essence Awards and BET Awards to award the best from their community, not waiting on acceptance from mainstream media.

However, as the demographics of this country shifts, more African-Americans have won the coveted Oscar.  But the lack of diversity amongst 2015 Oscar nominees have many questioning the process and criteria of getting Oscar nominations.

Many have called for a more diverse committee to select Academy Award nominees.  But if the Oscars need more diversity, do largely Black award shows need to reciprocate?

“I think in this day and age, at this level of influence Hollywood possesses, especially with the political sway they have, a lack of diversity at the Oscars is hard to interpret,” said Shane Dinwiddie, a 35-year-old White male from Loveland, Ohio.  “Black award shows do not need to be more diverse.  Bottom line is people will have opinions and there is not a right answer I suppose.

“If the African-American community feels the Oscars has a lack of diversity and this is the reasoning behind having African-American award shows, then so be it.  I would think these would exist to celebrate the success and creative work of that community alone, not due to being snubbed some years by the Oscars.”

Regardless of their intentions, award shows like the NAACP Image Awards have received flak for opening up their awards to non-Black talent and shows and movies with no Black stars.

According to the NAACP website, the Image Awards have existed since 1967 as a way for the group to support outstanding Black artists who challenged stereotypes instead of echoing them.

In a 2014 blog post from “Soul in Stereo” editor Edward Bowser wrote, “So we cry racism when our favorite Black folks don’t win Golden Globes and whatnot but we also don’t want White folks getting nominated for our awards…But when we expect the Image Awards—our awards—to exclude talented White artists in favor of Black folk aren’t we doing the same thing we accuse those biased selection committees of doing years ago?”

That lack of diversity undoubtedly carries over to the winners’ circle.

According to Bustle.com, 45 minority actors have been nominated over the past 20 years with 16 winners.

However, only three African-Americans have won for best actor in 20 years, Jamie Foxx, Denzel Washington and Forest Whitaker.

Only one has won for best actress and that is Halle Berry.

Furthermore, only three times has a minority won for Best Director (Alfonso Cuaron and Ang Lee, twice).  No African-American has ever won an Oscar for best director.

The Grammy Awards do not seem any more diverse than the Academy Awards when it comes to the big prizes.

For example, 35 albums by minority musicians have been nominated for Album of the Year over the past 20 years with only five winning the coveted title (“Genius Loves Company,” “The Miseducation of Lauryn Hill,” “River: The Joni Letters,” “Speakerboxx/The Love Below, and “Supernatural).”

Dinwiddie believes it can boil down to numbers and not necessarily discrimination.

“Don’t have the numbers, but I would assume in Hollywood the number of African-American actors, directors and producers, etc. are only a fraction of the Anglo population…so it boils down to numbers,” he said.

According to The Atlantic, 94 percent of Oscar voters are White, 76 percent are men and the average age is 63 years old.  Until that changes, the need for minority based award shows will persist because in order to have true diversity an effort has to be made by all demographics.