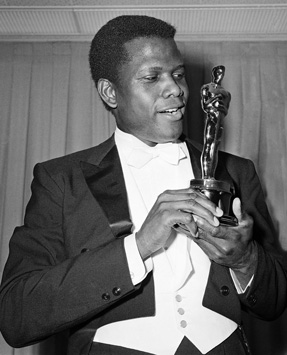 Actor Sidney Poitier is photographed with his Oscar statuette at the 36th annual Academy Awards on April 13, 1964.  He won Best Actor for his role in “Lilies of the Field” (Photo Credit: AP Photo).

One cannot think of Sidney Poitier’s role in “Lilies of the Field” without humming the lyrics to the song “Amen.”

That role in 1963 represented answered prayers for so many Black actors before him who did not get many opportunities in Hollywood.

Fifty-three years ago, “Lilies of the Field,” a film that almost did not get produced, made history when Poitier became the first Black actor to win an Academy Award as Best Actor.

Fifty-three years later, Oscar nominations for Black actors and actresses do not occur as often as they should.

And although many stellar performances by Black actors never get their just due, it is important that people remember those trailblazing actors that were fortunate to kick down the door to Oscar’s exclusive fraternity house.

Leading up to the 88th annual Academy Awards on Feb. 28, RegalMag.com will show appreciation to the brothers who got the shine they deserved from the Academy.

However, our appreciation has to start with the godfather of Black actors, Mr. Sidney Poitier, the winner of the Best Actor Oscar for his role in the 1963 film “Lilies of the Field.”

Even before his groundbreaking performance in “Lilies of the Field,” Poitier was breaking new ground in Hollywood by playing strong and non-stereotypical Black men in an era when Black male strength had to be tempered.

In 1950, Poitier played Dr. Luther Brooks, a Black doctor forced to care for two racist White criminals in “No Way Out.”

Over a decade later, he played a father determined to make a better way for his family for better or worse in 1961’s “A Raisin in the Sun.”

But his role as a traveling handyman who finds work-assisting nuns in “Lilies of the Field” secured his place in Hollywood history.

And the fact that it took a minor miracle to get “Lilies of the Field” to the big screen deserves an Amen!

According to TCM.com, “When United Artists would only cough up $250,000 for the entire production, (director Ralph) Nelson put up his house as collateral in order to ensure the movie could be made.  He also struck a deal with Poitier; since he would be unable to pay the actor’s salary in full, they agreed upon a profit-sharing deal with the box office returns.  In terms of tenacity, Nelson had a kindred spirit in his production manager, Joe Popkin.  Together they designed a shooting schedule so carefully crafted it would enable them to wrap the entire production in fourteen days.”

After his acceptance speech, which talked about his journey to that moment in history, Poitier continued to carefully craft his career by continuing to play powerful and intelligent characters.

Poitier made Mr. Tibbs, a Black police detective in charge of a murder investigation in a racially divided Southern town, a symbol of pride and integrity in “In the Heat of the Night” (1967).

In addition, he had the colossal task of portraying Thurgood Marshall in the 1991 television movie “Separate but Equal.”

No matter what role he took, the iconic actor had a positive representation of his community in the back of his mind.

His legacy is seen in the careers of Washington, Nate Parker, Stephan James and Michael B. Jordan.

To Poitier, we owe much praise for all that he has done for Black talent.

And for that we definitely say, Amen!