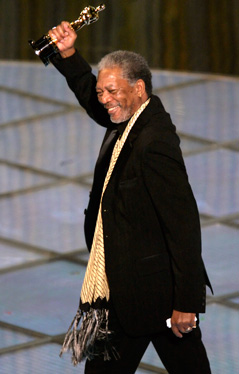 By 2004, actor Morgan Freeman had become the Susan Lucci of the Academy Awards.

But on the night of Feb. 27, 2005, two brothers in Hollywood were named Oscar (Jamie Foxx won Best Actor for “Ray” on the same night).  Since that night he has received another Oscar nomination (Best Actor for “Invictus,”) but for finally breaking through with an Oscar victory, RegalMag.com proudly salutes Morgan Freeman in our series on Black actors to win the Oscar.

The fact that Morgan Freeman was around 50-years-old before he received his first Academy Award nomination makes his rise to the top of Hollywood even more inspiring.

According to imdb.com, “Morgan was born in June 1937, in Memphis, Tennessee, to Mayme Edna (Revere), a teacher, and Morgan Porterfield Freeman, a barber.  The young Freeman attended Los Angeles City College before serving several years in the US Air Force as a mechanic between 1955 and 1959.”

Throughout the 1970s, he worked consistently in the theater, winning two Obie Awards in 1980 “for his portrayal of Shakespearean anti-hero Coriolanus at the New York Shakespeare Festival and for his work in Mother Courage and Her Children,” according to imdb.com.

“For most of the 1980s, Freeman continued to contribute decent enough performances in films that fluctuated in quality.  However, he really stood out, scoring an Oscar nomination as a merciless hoodlum in ‘Street Smart’ (1987)…”

After that first breakthrough moment with the Oscar nomination, critically acclaimed performances became the norm for Freeman.

Movies like “Lean on Me,” “Driving Miss Daisy,” “Glory,” “Unforgiven,” “Amistad,” and playing God in “Bruce Almighty” put him on the same pedestal as some of the greatest actors in the history of Hollywood.

While some may question the Academy nominating him for a subservient role in “Driving Miss Daisy” and as a thug in “Street Smart” while ignoring his positive and powerful role as Joe Clark in “Lean on Me,” no one can question the depth of his performances in any film.

Known more for serious roles, Freeman has shown an ability to succeed in lighter roles as well like “Ted 2,” “Last Vegas,” and “Evan Almighty.”

However, it is his work with Hollywood legend Clint Eastwood that has produced arguably his most memorable work.

The duo worked together in “Unforgiven,” “Million Dollar Baby” and “Invictus” in which he played former South African President Nelson Mandela.

But it was his work in “Million Dollar Baby” that will always be regarded as his best because of the Oscar victory.

After the win Freeman said, “I want to thank everyone and anybody who ever had anything at all to do with the making of this picture, but I especially want to thank Clint Eastwood for giving me the opportunity to work with him again and to work with Hilary Swank.  This was a labor of love.  And I thank the Academy.  I thank you so very much.”

However, RegalMag.com and all of your fans would like to thank you too.

Thank you for showing us the meaning of perseverance, dignity and hard work.

Morgan Freeman’s career has exemplified all three of the aforementioned characteristics.

Those characteristics are an inspiration to us all!