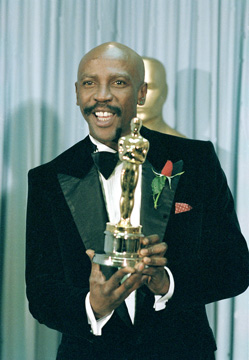 Lou Gossett, Jr. poses with his Oscar for “An Officer and a Gentleman” in Los Angeles on April 11, 1983 (Photo Credit: AP Photo/Reed Saxon).

Louis Cameron Gossett, Jr.’s destiny always had massive success in it, whether on a Broadway stage or on center stage at Madison Square Garden for the New York Knicks.

Born in Brooklyn, N.Y., Gossett’s life journey symbolized the essence of his hometown.  In a city known for basketball and theater, the future Academy Award winner’s talents represented the best that the city had to offer.

Although he had an opportunity to play for the Knicks after a stellar collegiate career at New York University, Gossett chose Broadway instead.

In 1959, his career received its biggest break to date, starring in “A Raisin in the Sun” by playwright Lorraine Hansberry.

Another stellar Black thespian appeared in “A Raisin in the Sun,” and almost 20 years after that actor, Sidney Poitier won an Academy Award, Gossett would follow in his footsteps once again.

An Academy Award for Best Supporting Actor should not have come as a shock for an actor of Gossett’s caliber.

After all, he had won an Emmy Award for his portrayal of Fiddler in “Roots.”

However, Academy Award recognition did not always come as often as it should have for Black actors in the 1980s.

Furthermore, playing strong drill sergeant Emil Foley in “An Officer and a Gentleman” was not the usual stereotypical role reserved for Black actors.

The Oscar victory and the strong role were definite watershed moments for Black Hollywood.

In his acceptance speech at the 1983 Oscars, Gossett thanked his ancestors for their guidance throughout his life in career.

Gossett stated, “I’ve got a spirit that guides me, starting with my great-grandmother who died at the age of 117, and my mom and dad who I know are watching, and my cousin Yvonne.  Thank you, you make everything fall into place.”

Made for only $7.5 million and grossing approximately $130 million, according to imdb.com, “An Officer and a Gentleman” told the story of Zack Mayo (Richard Gere) or “mayo-nnaise” as Foley liked to call him.

Mayo signs up for Navy Aviation Officer Candidate School, and despite being a Navy brat with a bad attitude, has to prove his worth to the hard-to-impress Sgt. Foley.

Gossett’s deep voice and strong, commanding presence almost had him typecast as a soldier or political leader throughout his career.

And although phone calls with offers for blockbuster movies did not come often after his Academy Award win, he found steady work in movies like “Sadat” and “Iron Eagle.”

Throughout his illustrious career, however, he has gotten the reputation of being difficult to work with because he speaks his mind.

Furthermore, he once stated that this notion of liberal Hollywood is just a myth, and Black actors were still not invited into the good ole boy network like their White counterparts.

“There’s always a double standard,” Gossett told CounterPunch.org.  “After I got an Oscar, I had to appear with a White actor to get work.  I had to give them money.”

The New York native had to learn to play “the game” just to remain active in Hollywood circles and not get blackballed from the industry.

And just like Spike Lee resurrected the careers of Ossie Davis and Ruby Dee, Tyler Perry did the same for Gossett and Cicely Tyson.

The Oscar winner has appeared in Perry films like “Why Did I Get Married Too” and “Daddy’s Little Girls.”

He is scheduled to make appearances in upcoming films like “Breaking Brooklyn,” “The Portrait’s Secret” and “Don’t Call Me Sir.”

His longevity in Hollywood is proof that talent trumps all, and not even an un-level playing field can stop a true winner from being triumphant and having a successful destiny.