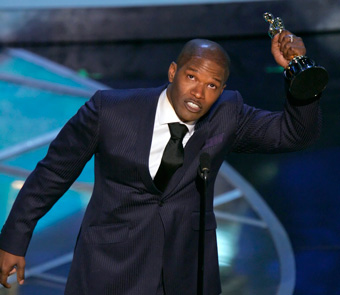 The Year of the Foxx

With so many award nominations that year, no one was surprised when he walked away with the Best Actor Award for his portrayal of music legend Ray Charles in the biopic “Ray.”

The only question that night was if he would walk away with two Oscars.

Foxx holds the distinction of being the only African-American actor to be nominated for two Academy Awards on the same night (Best Actor for “Ray” and Best Supporting Actor for “Collateral”).

For his fairy-tale like career from comic to award-winning thespian, RegalMag.com is honored to pay tribute to him in our ongoing series on “brothers” who have taken home Oscar gold in the acting categories.

According to biography.com, “A talented singer, comedian, and actor, Academy Award-winner Jamie Foxx has proved to be a triple threat in the entertainment industry.  After his parents’ marriage dissolved, Foxx was adopted by his maternal grandparents when he was less than a year old.  He enjoyed sports and music as a child, and attended Terrell High School in [Terrell, Texas].

“After receiving a scholarship, Foxx enrolled at the U.S. International University in San Diego where he majored in music.  It was during college that he was encouraged by friends to take the open mic one night at a comedy club, and his career in entertainment began.”

On cue, his first major opportunity came via the sketch comedy classic “In Living Color” where he became famous for such unforgettable characters as Wanda.

Luckily, he did not stay in drag long because he made a very unattractive woman.

However, he began to attract steady roles on television and film until his colossal breakout in 2004.

It became obvious that superstardom was in his future after WB gave him his own sitcom, “The Jamie Foxx Show.”

Movie star status began gaining momentum with roles in “Ali,” “Any Given Sunday” and as Blue in “The Player’s Club.”

However by 2004, it was clear that Jamie Foxx was much more than just a comedian.

Like Tom Hanks, he became just as powerful in dramas as he was funny in comedies.

The year he took home the Oscar for “Ray,” he also received a Golden Globe nomination for his portrayal of Tookie Williams, the co-founder of the Crips street gang, in “Redemption: The Stan Tookie Williams Story.”

A man that cares deeply for his family, he shared the award with his beloved grandmother who was no longer with us when he took home Oscar gold.

“My grandmother’s name is Estelle Marie Talley,” Jamie Foxx said.  “And she’s not here tonight.  And this is going to be the toughest part.  But she was my first acting teacher.  She told me, ‘Stand up straight.  Put your shoulders back.  Act like you got some sense.’

“We would go places and I would wild out, and she says, ‘Act like you’ve been somewhere.’  And then when I would act the fool, she would beat me.  She would whup me.  And she could get an Oscar for the way she whupped because she was great at it.

“And after she whipped me, she would talk to me and tell me why she whipped me, said, ‘I want you to be a southern gentleman.’  And she still talks to me now; only now she talks to me in my dreams.  And I can’t wait to go to sleep tonight because we got a lot to talk about.”

Those talks and acting lessons from his grandmother continue to pay off.

Even after his Oscar, Jamie Foxx has continued to shine on the big screen with roles in “Dreamgirls,” “Django Unchained” and “The Amazing Spider-Man 2.”

His long career has been nothing short of amazing and more years like 2004 are not out of the question when it comes to someone as talented as Jamie Foxx.