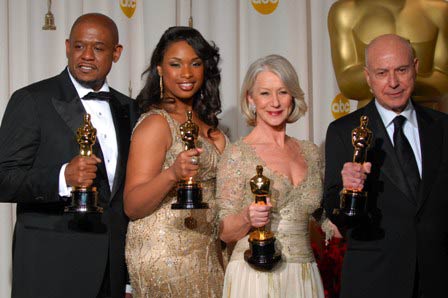 When one gets a large platform to display one’s talent, usually it happens because of a higher purpose.

Celebrity status is often a conduit for a bigger mission in life.

Academy Award winning actor Forest Whitaker is one of those rare celebrities who deserves just as much shine for his philanthropy as his award-winning performances on the big screen.

For his Best Actor Oscar performance as Ugandan dictator Idi Amin in “The Last King of Scotland” and his work in the community, RegalMag.com is proud to honor Forest Whitaker in our series on Black actors who have won the coveted Academy Award.

The Longview, Texas native, born on July 15, 1961, had superstardom written all over him from an early age.

The only question was which route he would take to superstardom: athletics, music or acting?

After his family moved to Los Angeles, his first love became sports.

According to imdb.com, he earned a football scholarship but later transferred to University of Southern California “where he set his concentration on music and earned two more scholarships training as an opera tenor.  This, in turn, led to another scholarship at Berkeley with a renewed focus on acting and the performing stage.”

Forest Whitaker made his big screen stage debut at 21-years-old in “Fast Times at Ridgemont High” playing a football player.

Thanks to a performance alongside Paul Newman and Tom Cruise in “The Color of Money,” Whitaker began making a big name for himself in Hollywood.

From that moment on, big roles starting pouring in for Forest Whitaker like “Good Morning Vietnam,” “Platoon,” “A Rage in Harlem,” “Jason’s Lyric” and playing jazz great Charlie Parker in the biopic “Bird.”

The consummate thespian, he also began directing as well.

His first stab at filmmaking came via the film adaptation of Terry McMillan’s novel “Waiting to Exhale.”

Furthermore, he directed Houston’s video for “Exhale (Shoop Shoop),” which appeared on the soundtrack to “Waiting to Exhale.”

However, his shining moment in Hollywood was obviously the night he took home the Oscar for Best Actor for his performance in “The Last King of Scotland.”

In his Academy Award acceptance speech Forest Whitaker said, “When I was a kid the only way that I saw movies was from the backseat of my family’s car at the drive-in, and it wasn’t my reality to think I would be acting in movies.  So receiving this honor tonight tells me that it’s possible.  It is possible for a kid from east Texas, raised in South Central L.A., in Carson, who believes in dreams, commits himself to them with his heart, to touch them and have them happen.”

It is possibly because of his humble beginnings that he has never forgotten to use his fame to give back to causes that are near and dear to his heart.

According to imdb.com, “Whitaker has done extensive humanitarian work, he has been involved with organizations like, Penny Lane, an organization that provides assistance to abused teenagers…During the last couple of years, he has become a spokesperson for Hope North Ugandan orphanage and Human Rights Watch.”

Forest Whitaker’s philanthropic work has done more for society that has artistic work.

And that mentality should be the modus operandi for every celebrity blessed with such a huge platform.