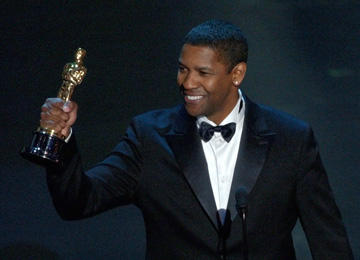 The Second Time Around

On the night he won the Best Actor Academy Award for “Training Day,” actor Denzel Washington said, “Two birds in one night, huh?  Oh, God is good.  God is great.  From the bottom of my heart, I thank you all.

For decades, Poitier (who received an honorary Oscar on the night Washington won for “Training Day”) had set the standard for Black actors with “Lilies of the Field” in 1963, becoming the first Black man to win the Oscar for Best Actor.

And sure Lou Gossett, Jr. (“An Officer and a Gentleman”), Washington (“Glory”) and Cuba Gooding, Jr. (“Jerry Maguire”) had won Best Supporting Actor in years past.

But nothing held the prestige of Best Actor or Best Actress.

However, on March 24, 2002, arguably the two best actors in the history of Black Hollywood shared that distinction.

On that day, Washington followed in his mentor’s footsteps, by becoming the second Black actor to win an Academy Award for Best Actor for his performance as a crooked police officer in “Training Day.”

His career arc had legendary written all over it from day one.  And RegalMag.com is proud to honor him in our series on Black actors who have taken home Oscar gold.

According to imdb.com, “Denzel Hayes Washington, Jr. was born on December 28, 1954 in Mount Vernon, N.Y.  He is the middle of three children of a beautician mother Lennis (Lowe), from Georgia, and a Pentecostal minister father, Denzel Washington, Sr. from Virginia…

“He made his first big screen appearance in ‘Carbon Copy’ (1981) with George Segal.  Through the 1980s, he worked in both movies and television and was chosen for the plum role of Dr. Philip Chandler in NBC’s hit series ‘St. Elsewhere’ (1982), a role that he would play for six years.  In 1989, his film career began to take precedence when he won the Oscar for Best Supporting Actor for his portrayal of Tripp, the runaway slave in Edward Zwick’s powerful historical masterpiece ‘Glory’ (1989).”

Like his predecessor Poitier, many of Washington’s movie roles could have won Oscars.

Although he finally broke through in the Best Actor category for “Training Day,” he could have easily taken home the Oscar for “Malcolm X,” “Cry Freedom,” “The Hurricane,” “John Q” and many others.

For his role in “Glory,” Washington showed the range and versatility that have become synonymous with his illustrious career.

Who could forget the tears that rolled down his face after he was severely beaten like a slave?

But that role was just a microcosm of the roles he has taken on since the 1980s.

Washington makes films not only to entertain, but films that inspire and educate as well.

In his acceptance speech for Best Supporting Actor he paid “homage to the 54th, the Black soldiers who helped to make this country free.”

And RegalMag.com would like to thank Washington for helping educate this country on heroes like the Black soldiers who fought during the Civil War (“Glory”).

RegalMag.com would like to thank him for educating many on iconic Nation of Islam leader (“Malcolm X”).

RegalMag.com would like to thank him for educating many about Wiley College professor and debate coach Melvin B. Tolson (“The Great Debaters”).

And RegalMag.com would like to thank the two-time Oscar winner for educating many about anti-apartheid leader Steve Biko (“Cry Freedom”).

But most importantly, RegalMag.com would like to thank Washington for continuing the legacy started by Poitier a half century ago.