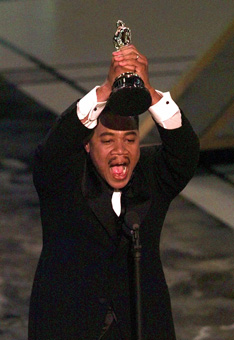 Even if one does not love Cuba Gooding, Jr. as a fan, how can one not love his acceptance speech after winning the Best Supporting Actor Oscar for his role of diva NFL wide receiver Rod Tidwell in “Jerry Maguire.”

His exuberance at the 1997 Academy Awards was heartwarming.  If only fans showed the same exuberance for his later films, maybe his Oscar would have catapulted him to superstar status.

Unfortunately, it did not.  However, on March 24, 1997 Hollywood belonged to Gooding, and RegalMag.com is proud to honor him in our series on Black actors who took home Oscar gold.

According to imdb.com, “Cuba Gooding, Jr. was born on January 2, 1968, in The Bronx, New York.  His mother, Shirley (Sullivan), was a backup singer for The Sweethearts.  His father, Cuba Gooding, was the lead vocalist for the R&B group The Main Ingredient, which had a hit with the song ‘Everybody Plays The Fool’….

“Cuba’s father moved the family to Los Angeles in 1972, only to leave them a few years later…Following high school, Cuba studied Japanese martial arts for three years before turning his focus toward acting.  Early on, he landed guest starring roles on shows like ‘Hill Street Blues’ (1981) and ‘MacGyver’ (1985).”

Raise your hand if you thought that the young man getting his haircut by Mr. Clarence (Eddie Murphy) in “Coming to America,” with no speaking lines would one day give one of the most memorable acceptance speeches in the history of the Academy Awards.

Maybe that realization occurred to you with his later performances.

Three years later, moviegoers finally began hearing a crescendo of noise after his breakthrough role of Trey Styles in “Boyz N the Hood.”

However, his career hit a resounding peak with his unforgettable role as the charismatic Arizona Cardinal Rod Tidwell opposite Tom Cruise in “Jerry Maguire.”

And while critics can hate on his movie choices following the Oscar such as “Radio,” “Boat Trip” and “Snow Dogs,” his roles as of late show his enormous talent and appreciation for Black history.

Over the past few years, Cuba Gooding, Jr. has appeared in such important theatrical films as “Red Tails,” “Selma” and “Lee Daniel’s The Butler” as well as television movies/miniseries “The Book of Negroes,” “Gifted Hands: The Ben Carson Story” and currently as O.J. Simpson in “People v. O.J. Simpson: American Crime Story.”

The charisma that he displayed as Trey Styles in “Boyz N The Hood” is still there especially in “Lee Daniel’s The Butler.”

Despite negative reviews for his performance as Simpson, the role is showing that he could once again be box office gold.

“This was the hardest role I’ve done,” Cuba Gooding, Jr. said.  “It took me a good month or so after filming the show to finally get back into the right frame of mind.”

Now that his career is back on the incline, one can only hope Cuba Gooding, Jr. gets back to the exuberant frame of mind he was in the night he took home Oscar gold.

With his recent performances he is once again reaching that gold standard he set for himself 20 years ago.