Celebs Raking in Big Bucks on TikTok During Quarantine 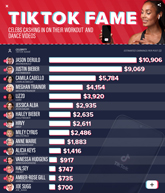 One of the problems with social distancing or self-isolation remains the inability to get to the gym to workout.

While many people have taken a financial hit, maintaining physical and mental health should remain a priority for all Americans, celebrities and non-celebrities alike.

To stay in shape and encourage physical fitness while in quarantine, celebrities and non-celebrities have started sharing workout and dance videos on the social media platform, TikTok.

“I was just in bed all the time and I didn’t really have access to the gym,” said Columbia University graduate school student, Richard Unite. “I wanted to find a way to have some kind of outlet for exercising and having fun without leaving the house because I was too scared.”

Columbia University is in New York City, one of the cities that have suffered the most from COVID-19.

Unite, 25, is a resident of the West Harlem area of Manhattan, N.Y.

But celebrities and social media influencers are using the TikTok app not just to stay in shape and relevant, but also to stay in the black, financially.

According to GolfSupport.com, singer Jason Derulo makes an estimated $11,000 per post on TikTok.

Singer/rapper, and Houston native, Lizzo brings in about $4,000 per post for her dancing videos.

Actress and singer Vanessa Hudgens makes about $917 per TikTok post.

And “Love Island” winner Amber-Rose Gill collects about $735 per post.

While social media influencers just added to their already large coffers with their social media posts in the past, their status as influencers has helped them make up for lost cash during the COVID-19 pandemic.

Many people might look at celebrities as immune from the ups and downs of the economy.

However, the coronavirus crisis has hit just about every facet of the economy, including the music, film and television industries.

Movie theaters have shut down.

Even the future of such movie theater chains as AMC remains in doubt even after the crisis ends because of the company’s poor credit rating.

The hit Fox soap opera “Empire” had to cut some future episodes from the schedule because of the coronavirus pandemic.

The music industry is no different.

Songwriters and producers still make publishing money because their songs still receive airplay on the radio.

But music purchases have probably dropped.

Because of social distancing, concerts will not happen for the foreseeable future.

And performing brings in a lot of revenue for artists with ticket purchases and merchandising.

Additionally, since movies and television shows have come to a halt, so has the licensing of music for those shows and movies.

But that celebrity status that the music, film, fashion and television industry provides makes these stars ideal spokespeople for other brands.

As a result, if a person’s favorite singer likes a certain fragrance or beverage, the fan might be more likely to purchase it than they would be if they saw a regular commercial.

Paying social media influencers also saves brands money because they do not have to pay for the elaborate production of a television commercial or professional photo shoots.

They simply can pay the talent and avoid paying the copywriters and members of the production crew.

In November 2019, IndiaToday.in released some pointers on how to earn money on the TikTok social media app.

First, a user has to make a unique TikTok profile.

Second, users should pick songs that are currently trending to use in their dance or exercise videos.

By linking pages, a user can get their followers from other social media platforms to follow them on TikTok as well.

Next, make sure your video reaches a large amount of people so that the organic ranking of the video goes up.

Furthermore, include hashtags with your TikTok videos like on all other social platforms to increase the visibility of the post.

When the videos become popular, then a user has the possibility of attracting brands that will pay influencers to promote their products or services.

Most importantly, the success of the TikTok video comes down to how entertaining it is above anything else.

The videos are supposed to be short and fun and something that the younger generation will gravitate to.

A schoolteacher in Kingwood, Texas has recently become popular for using TikTok to engage with her students who are learning via the computer at home.

Tricia Zinnecker, a sixth grade teacher at Creekwood Middle School in the Greater Houston area made the videos to entertain her students, not educate them.