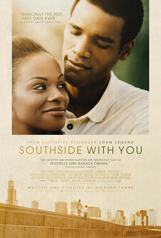 One never knows what a person will amount to.

For First Lady Michelle Robinson Obama, a reluctant first date with a legal intern turned into the best first date ever.

And that intern turned out to be the future President Barack Obama.

But finding actors to capture the essence of the Obamas was the keys to making the film “Southside with You” resonate with supporters of the Obama presidency.

The film version of the First Family recently sat down with RegalMag.com to discuss “Southside with You.”

RM: Many people know that the Obamas saw Spike Lee’s movie “Do the Right Thing” on their first date.  Of all the scenes, why did you all pick the scene of Radio Raheem (Bill Nunn) dying as a result of police brutality?

Sumpter: We didn’t pick it.  Rich (Tanne) picked it.  It was a part of the script since years ago.

RM: So it doesn’t have anything to do with the controversy recently about police brutality?

Sumpter: No.  It’s just kind of like…coincidence.  And it’s still relevant 20 something years later. It’s very relevant and that’s why I think all of the cultural references, picking Radio Raheem, that scene.  That’s why I thought it was an intelligent script from the beginning.  Because I was like, “Wow, you’re able to put all of these threads in without beating someone over the head with it and preaching at them.”  I feel like, yes it’s a love story, but there are so many themes throughout it.

RM:  Tika, you read Michelle’s brother Craig Robinson’s book for background information on Michelle.  Were you able to find video or other things that helped you with the role?

Sumpter: No.  I saw pictures of her when she was younger.  Not that I know of, that there’s any 25-year-old Michelle Obama videos out there.  But because of people’s personal accounts I was able to kinda gather what I thought she would be like.  And Craig Robinson’s book really did help me.  (It) just grounded me in who their family was and why she was so confident in herself.  And then I got a voice coach for dialect because she does have a certain twang in her voice.  Then I watched videos of her speaking to graduates and she’s just real loose with it.  She’s the girl from Southside.  And sometimes in this film when I talk to him, I’m the girl from the Southside.

RM: Parker, President Obama has used words like evolve to describe his views on certain political issues.  And in the scene when the two discuss religion, he says I’m evolving.  Did you have any input into that dialogue?

Sawyers: No, that was Rich.  The script is sort of locked down by lawyers and they check just to make sure, which I think they do with every biopic on people still living.  So, no that was Rich.  It was amazing that he…there was a podcast that came out…like three weeks before we started filming…and I was listening to that, and I had the script and I was preparing, and listening to that and I was like, “Rich, really got his voice.”  The way he speaks. Like, word order.

RM:  Tika, as a producer why was it important to show this particular love story as the first Obama biopic?

Sumpter: I wouldn’t call it a biopic.  I would call it just a story based on their first date and public domain and pieces from here and there. But, I think it’s important because I think images are very powerful and I think in every class, race, whatever, there are different parts to us.  And I think, it’s just a complex story.  I think it’s intelligent.  It’s a way we don’t normally get to see two African-American leads talk to each other.  And it wasn’t about taking off clothes.  Usually those kind of romantic stories are about taking off clothes (and) getting to know after.

RM: Parker, what research did you do into Mayor Harold Washington’s tenure in Chicago to capture what residents were really experiencing during Obama’s time as a community organizer?

Sawyers: You know what’s really cool is…for a few days we shot in Altgeld Gardens where he actually community organized. And we met a couple of people who worked with him back then.  And so just to understand, one they had their own personal Barack Obama stories at that age.  And I got the OK.  “Yeah, you look like him.”  There’s that and then there’s sort of like “Do the Right Thing,” there’s still ongoing problems.  I was talking to a young man who was on a cane and I asked him what happened, and he said, “Three weeks prior, he had been shot.”  He was a security guard and he had been shot in some altercation.  And he lived in Altgeld Gardens.  So it’s like, man these things are still going on at least a little bit.  I understand it’s cleaned up a little bit since then.  That definitely helped to hit home.