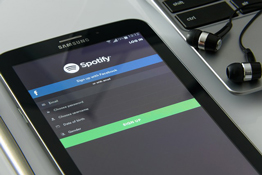 The music streaming service Spotify recently reversed course on its new policy of removing artists from the platform that appeared to promote hate speech or hateful conduct.

Spotify seemed to go after artists that women accused of sexual misconduct or domestic violence like R&B artists R. Kelly and Chris Brown.

“Across all genres, our role is not to regulate artists,” the company said in a statement released on June 1 in which the streaming service admitted that their planned policy contained too much vagueness.

“Therefore, we are moving away from implementing a policy around artist conduct. We don’t aim to play judge and jury.”

While the planned hate speech policy received praise from some feminist organizations, the rule itself seemed to contradict the First Amendment, which protects hate speech.

Furthermore, some people argued that a person’s behavior, regardless of how controversial, does not necessarily equate to hate speech.

Additionally, how would the hate speech or hateful conduct rule impact gospel or Christian artists?

Many singers in the gospel and contemporary Christian genres also serve as preachers and pastors of churches.

Would they have their music snatched from Spotify if they preached that the Bible labels homosexuality as a sin?

Or would they have to sanitize their message or contradict the Bible and their religious beliefs because someone sees those beliefs as hateful?

The slippery slope that Spotify found itself on, possibly, led to a change of heart.

Hip-hop impresarios like Anthony “Top Dawg” Tiffith of Top Dawg Entertainment, the recording home of artists like Kendrick Lamar and SZA, felt that the rule could also single out rap artists for censorship.

Tiffith threatened to remove all Top Dawg Entertainment artists from Spotify because of the policy.

“How come they did not pick out any others from any other genres or any other cultures? There [are] so many other artists that have different things going on, and they could’ve picked anybody,” explained Tiffith.  “But it seems to me that they’re constantly picking on hip-hop.”

Spotify had also removed rapper XXXTentacion from its curated playlists as a result of the planned policy.

When it announced its planned policy for hate speech and hateful conduct, Spotify initially said that listeners could still find “banned” artists like Brown and Kelly, but those artists would not find themselves on playlists and the company’s discovery algorithms.

While listeners could find music from the “banned” artists, Spotify would stop promoting those artists.

Reports show that 31 percent of songs streamed on Spotify come from the company’s curated playlists.

Many critics of the policy asked Spotify why artists like Michael Jackson and Gene Simmons did not get “banned” based on the planned policy because those artists have faced allegations of domestic battery and sexual assault in the past too.

By June 1, XXXTentacion’s music had returned to Spotify playlists while Kelly’s music still remained absent on the streaming service’s playlists.

Spotify said the company will still stand by its policy to remove hateful speech, which consists of conduct meant to incite hatred or violence against a group because of race, religion, disability, sexuality or gender identity, and conduct from its playlists.

However, the streaming service said that the policy does not extend to simply vulgar or explicit content.

In other streaming news, Spotify continues its attempt to make the company appealing to musical artists.

Reports show that Spotify will offer advances and beneficial business packages to independent artists in order to get those artists to license their music directly to Spotify.

Currently, many artists go through third party distribution companies like TuneCore to get their music played on streaming platforms.

The advance could be in the range of several hundred thousand dollars.

Spotify, reportedly, will offer some independent artists a 50 percent cut of per stream royalties.

That rate remains less than what record labels receive, but much more than artists receive from label royalties.

Spotify’s deal might cut distributors out, as the middlemen will no longer be needed.

Independent artists will be able to keep their full revenue generated from streaming.

Furthermore, independent artists will get to maintain ownership of their master recordings, which is basically unheard of if an artist is signed to a record company.

The new streaming deals will probably only exist for successful indie artists because presenting the same deal to a large number of artists might prove too problematic for Spotify.

Additionally, Spotify will ask the independent artists who receive this business deal to refrain from saying things like they’ve signed to Spotify because record labels have forbidden the streaming service from competing with record labels.

Therefore, Spotify will likely just sign unsigned indie acts instead of trying to poach established artists from their record labels.

Ek said, “I don’t view us winning as equivalent to them losing. The best labels that I see are service businesses. They partner very, very deeply with artists. They’re around. They help with A&R. They put them together with great producers. It’s more than just the actual marketing piece of it. It’s about booking shows; it’s about the right collaborations. There’s so many aspects of making it as an artist today. I don’t think that goes away.”

However, Ek does realize that Spotify’s new business deal for popular independent artists could become a game changer for the music industry.

“I still think that there’s huge inefficiencies when you think about how hard it is for artists to break through,” Ek continued. “The number one thing artists are asking for is ‘help me find an audience.’”

Ek hopes Spotify’s new business arrangement will create more tools for musicians and their management to establish more opportunities to reach a much broader audience and develop a fan base.

“There’s a bigger opportunity for us to grow our pie,” Ek added.

Regardless of the outcome, the first week of June 2018 has become a turning point for the streaming service, and that turning point is more artist-friendly than in the past.