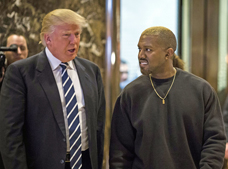 While rapper/producer Kanye West definitely deserves empathy because mental health deserves concern, the eccentric star has definitely given the world some strange and outrageous moments that have left people perplexed.

Fresh out of the hospital, West recently visited President-elect Donald Trump to discuss life and/or multicultural issues depending on what report one reads.

There is nothing wrong with having a seat at the table of the President-elect despite what critics say about NFL legends Jim Brown and Ray Lewis because how can Black issues get on the agenda if Black people cannot get into the room?

What is strange is why Trump thinks West is someone knowledgeable enough to discuss multicultural issues and not someone who is dedicated to uplifting the minority community.

Nevertheless, strange and West go hand-in-hand like white on rice.

Therefore, RegalMag.com would like to stroll down memory lane and remember five of West’s most outlandish remarks and actions.