Fans Give Mixed Reactions for Possible Think Like a Man Sequel 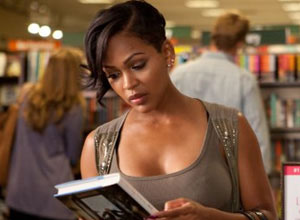 Fans are divided on whether they want to see Meagan Good and company in a sequel for the instant classic movie.

Fans React to Possible Think Like a Man Sequel

It’s no small feat to trump a movie like Hunger Games that was No. 1 at the box office for four consecutive weeks, but Think Like a Man based on Steve Harvey’s New York Times best-selling book—giving women advice on achieving a lasting relationship—Act Like a Lady, Think Like a Man, did it not once, but twice.

The mostly African American ensemble cast including Taraji P. Henson, Michael Ealy and Kevin Hart has grossed over $80 million at the box office (it cost $12 million to make) since the movie’s debut in April, and rumors of a Think Like a Man sequel have some fans screaming “YES” louder than Meg Ryan in When Harry Met Sally, and others shaking their heads.

“Nope, nope,” says Marcie, 32, from Ohio, (who preferred not to use her last name) in response to a possible Think Like a Man sequel. “That’s one of those movies you don’t touch, leave it alone. That movie captured real life feelings about relationships; you don’t make a part two.”

However Marcie, who read Act Like a Lady, Think Like a Man and Harvey’s 2010 follow-up Straight Talk, No Chaser, admitted she would go see the sequel if there was one, but thinks it wouldn’t be as good as the original movie.

A sentiment shared by film critic Shawn Edwards—who described the movie as “a 90-minute infomercial for Steve Harvey’s book, but it’s also incredibly likeable”—says a Think Like a Man sequel could lead to a string of copy cat versions of the romcom’s genre, which could water down the movie’s original message.

“Yes, you want to see more African American comedies, but you don’t want just everyone to do it,” Edwards explains. “[With the] Blaxploitation [movie] era every Dick and Harry was doing them, which ran the genre into the ground.

“John Singleton made Boyz n the Hood; soon we had Menace II Society… [The movies] weren’t all done in the same manner. Think Like a Man was successful, but it has to be done with skill, supported in the same way, marketed correctly.”

Kevin Dwayne, 26, from California, says the marketing for Think Like a Man is what sets it apart from other African American movies.

“They marketed a little more to be universal, a balanced cast,” Dwayne tells Regal. “It was a movie all audiences can watch. If I went with my friends that are Caucasian they wouldn’t have to ask, ‘what did that term mean?’”

Unlike most African American romantic comedies that feature mostly Black couples, Think Like a Man includes an interracial couple, and the band of guys was also made up of comedian Gary Owen best known for his role as Zach on the TV series “House of Payne” and Jerry Ferrara, who starred on the HBO series “Entourage.”

A refreshing take for a genre that is usually not diverse, but the premise is lacking in originality says Dwayne.

“There have been plenty of movies like this,” says Dwayne, who cites New Year’s Eve and Valentine’s Day as examples. “If more movies go with this formula I wouldn’t mind it,” he adds.

Some moviegoers also wouldn’t mind a sequel according to an opinion poll by Atlanta radio personality Russ Parr to see if there should be a Think Like a Man sequel. Nearly 70 percent of moviegoers voted yes and 39 polled no to a second movie on Parr’s website.

“I would see a [Think Like a Man] sequel,” says Dwayne. “[But,] there is anxiety about sequels because it may get overzealous. I would support it in the vein of the first movie. See how the characters progress since the first one.”

Screen Gems, a subsidiary company of Sony Pictures that produced Think Like a Man, has yet to formally announce a Think Like a Man sequel and Will Packer, the movie’s producer, is also mum.

However, Humor Mill magazine reported that a sequel is in the works that will explore marriage.

Reinforcing the rumors is Tony Rock, a comedian that had a cameo in the movie. He told a Houston radio station that the cast has signed on for a Think Like a Man sequel.

If so, it will be the second African American romance sequel that will be splashed across the big screen.

It was revealed last year that Universal Studios is priming for a sequel to the popular 1999 romcom The Best Man that grossed $35 million.

“When a movie like Think Like a Man comes out audiences flock to theaters,” Gina Prince Bythewood, writer and director of Love and Basketball, told CNN. “There’s a huge audience out there, starved for content.”

Edwards believes the only way to fill it is to focus less on a Think Like a Man sequel and more on original storytelling.

“Leave [Think Like a Man] as a classic, a standalone classic,” he says. “New material fits in that same genre. There are other stories that need to be told.”