Fans Debate Who Should Join Prince at Essence Festival 2014 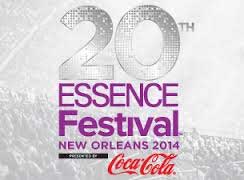 When all his friends reunite in New Orleans to brave its early July humidity for the annual “party with a purpose,” more popularly known as the Essence Festival, a four-day jubilee—sponsored by Essence magazine, a preeminent African American women’s publication—including empowerment seminars revolving around health and relationships. And the real spark to set the July 4 weekend ablaze are musical performances from several R&B, hip-hop and gospel artists.

Cooper and his brother—who always attend the Essence Festival together—create their own opportunity to keep the jam fest going long after the curtain drops on the night’s last act with their suite party offerings of free food and liquor.

Invitations aren’t necessary, but if you’re a familiar face to Cooper it will get you through the door faster, just to see how quickly an Essence Festival suite party turns into an A-list event.

“About five years ago, I stayed at the Ritz-Carlton; the best party I’ve ever thrown,” recalled Cooper, who throws a suite party nearly every year while attending the Essence Festival. “I had a suite [that was] 2,100 square feet. I invited a lot of people to the party [and] Lisa Raye, Boris Kodjoe, Omarosa Manigault and Sherri Shepherd attended.”

And why spend thousands of dollars on gallons of Crown Royale and 50 bottles of Grey Goose without charging a penny each year?

“It’s something I enjoy doing,” Cooper, who has attended 15 festivals explained. “[It’s] a pleasure to see a smile on people’s face.”

Essence Festival 2014 attendees have another reason to be exuberant.

Essence announced Prince as the headline performer for Essence Festival 2014, held July 3-6. This will be the second time the iconic performer and the Essence Festival have collaborated. Prince rocked the Superdome Mainstage in 2004 alongside protégé Sheila E.

To mark the Essence Festival’s 20th anniversary, his purple highness will no doubt hypnotize the crowd into thinking it’s 1999 again, in addition to lending support behind a youth empowerment initiative spearheaded by Rebuild the Dream Innovation Fund, which encourages teens to explore the computer science field to engage their local communities.

“Not only is [Prince] committed to a performance [but he’s also committed] to a community passion to further educating our youth,” revealed Joy Collins, general manager of Essence Communications, in an exclusive interview with Regal. “We are happy to partner with Prince.”

Although Collins was tightlipped about the other names on an ever-evolving performers list for Essence Festival 2014, she hinted to Regal that next summer’s milestone year will bring the biggest moments over the past 20 years. And festival-goers happily shared which empowerment speakers and musical artists would help make it memorable.

Stephanie Ford, an Alexandria, La. native that has attended 10 Essence Festivals, says she’s excited to see her first Prince concert at Essence Festival 2014 and hopes Essence will add one popular ‘80s ensemble to the lineup.

Ford also suggested the cast of “The Best Man Holiday” and filmmaker Tyler Perry as empowerment speakers for the Essence Festival 2014.

“One person that would be great is Kerry Washington because everyone is watching ‘Scandal,’” suggested Cooper.

It seems everyone is also getting in on the fitness/dance craze of Zumba, which is what Atlanta native Marcia Woods would like the Essence empowerment seminars to adopt.

“I would like to see more fitness focused stuff because of the food we eat. They should put more emphasis on health during the empowerment [series], even Zumba, which is a thing that’s popular.”

In addition, Woods, who has 12 Essence Festivals under her belt, says for the 20th anniversary she desires more out of the ordinary music acts.

“[Essence should] totally do an old school hip-hop night; we would dress the part [with] Adidas [sneakers] and Kangol [hats],” offered Woods. “My favorite [acts to see would be] Doug E. Fresh, MC Lyte, Big Daddy Kane, LL Cool J, Slick Rick and of course, Public Enemy. Since it’s the 20th, it would be a nice change for attendees.”

A State College, Pa. resident and five-year Essence Festival attendee Rick Stringer can support any legend, but would like to add a few more artists to the marquee.

“I’d like to see old school hip-hop acts from the ‘90s like KRS-One,” shared Stringer, who also offered Sade, Amerie, Parliament and Mint Condition from his I-am-dying-to-see list.

Before the rapid fire performer recommendations change faster than Rihanna’s hair-do, there is an Essence staffer in New York monitoring festival-goers wants on Facebook, Twitter and the Essence Festival app.

“We encourage two-way dialogue,” assured Collins. “We still want to hear from our audience to bring the most relevant subject matters, and we do listen to what our festival goers want to see and hear.”

Considering that the Essence Festival was originally conceived as a one-time event highlighting Essence magazine’s 25th anniversary in 1995 with 140,000 in attendance, it now spans 19 years with a record of over 540,000 fest goers last year.

And what Essence Festival goers want is to keep the fest right where it is and always has been (except in 2006 when it was held in Houston due to Hurricane Katrina), New Orleans. Revelers say New Orleans provides a massive appeal to Essence that no other city can replace.

“New Orleans is the perfect storm because the main venues are a short proximity to each other,” said Stringer, who extends his Essence Festival getaway to a full week. “Like the Convention Center and French Quarter…in Houston the vibe was gone. New Orleans has a charm and ambiance, and it’s hard to imagine Essence continuing in a city other than New Orleans.”

“The summer in New Orleans is not a big tourist climb,” revealed Rice. “[The Essence Festival] is an anchor for the summer and it has been for very many years.”

MSNBC reported the city of New Orleans brought in a record of over $100 million with the Essence Festival and area hotels had a 95 to 98 occupancy rate this past summer.

Collins says she’s looking forward to breaking new records with Essence Festival 2014 that will continue to incorporate all extensions of the Essence brand.

“We’re going to take the opportunity to go deeper and expand the empowerment stage with critical health issues, (improving) finances, (shaping) resumes, and (having) our audience engage one-on-one with Essence editors,” explained Collins. “The Essence Festival is all about bringing the best of what you are with one brand, one experience where audiences can shine and be a star.”