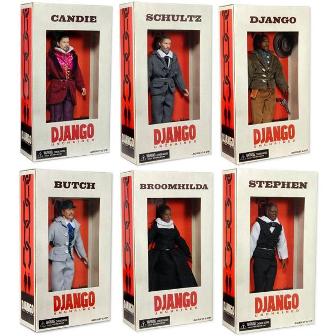 Slave dolls based on the film Django Unchained are causing more controversy for the critically-acclaimed film (Photo courtesy of New York Daily News).

Award-winning director Quentin Tarantino and production giant Weinstein Company are in the middle of a major firestorm, not over their blockbuster film Django Unchained starring Jamie Foxx, but the line of slave dolls being sold as merchandising components of the movie.

Critics have hailed the movie as a success, but major civil rights organizations including Rev. Al Sharpton and the National Action Network, as well as Black directors including Spike Lee are opposed to the slave dolls and the movie itself.

The slave dolls, which were produced by the National Entertainment Collectibles Association based upon input from the Weinstein Company, includes representations of house slaves and other characters in the movie that generate strong sentiments from members of the African American community who are predominantly descendants of African slaves.

“Our problem is not with the film or with the African American actors in the film,” said Najee Ali, Executive Director of Project Islamic HOPE, a Los Angeles civil rights organization, who led the protest at the Golden Globes.

“We had to call attention to what these dolls represent and that this trivializes the slave trade and the atrocities experienced by those who were brought to this country against their will. We had to inform those making the merchandising decisions that our history and the degradation that our ancestors experienced during the Middle Passage, slavery and post slavery is not something that we shall forget. It is our holocaust.”

Ali, who led a coalition of civil rights groups at a protest during the Golden Globe Awards in Los Angeles, has seen the movie and knows that Tarantino has marketed collectibles from his other action movies.

“Yes, I did see the film and the lead character – played by Jamie Foxx – is heroic in his portrayal and he has no control over licensing and merchandising. However, this line of dolls and accessories representing slavery in America crosses a line and stirs up a painful past in this country’s history where millions of our ancestors died during the Middle Passage to this country; were worked to death or killed during slavery; and died of starvation, diseases and murder following Emancipation and the rise of the Ku Klux Klan.”

With a number of civil rights organizations and media groups calling for a boycott on the slave dolls, there are others who are not as fired up about these dolls as they are about other questionable collectibles.

Mary Mitchell, columnist with the Chicago Sun Times put it this way in her online piece, “Django – An Action Figure Doll”: “If National Entertainment Collectibles were marketing dolls in tattered clothing, wrapped in chains, or holding whips, I’d be appalled. ‘Django’ is an action hero — the guy in the good-guy hat shooting good-guy bullets. Not only is he the hero, he became a free man early in the story. Frankly, I like the ‘Django’ action figure a whole lot more than I liked the ‘Chia Pet’ that was designed in the likeness of President Barack Obama and sported a green Afro.”

However, she does remind her readers about the remnants of slavery and its impact on those whose ancestors lived that nightmare.

She added, “Walgreens stores in Chicago and Tampa were forced to pull the quirky items from their shelves after getting numerous complaints from folks who considered the Obama Chia racist. I’m predicting that will ultimately be the fate of the line of ‘Django’ action figures.

“The makers of these items shouldn’t have expected this idea to go over very well. The more they stonewall, the louder the protests are going to get.  Slavery is the wound that won’t heal. No matter how much time passes, there are still people who are ultra-sensitive about anything connected to slavery.”

At the end of the day, it is about respect.

“We want the slave dolls removed immediately because our ancestors who were beaten, raped and tortured should not be reduced to a toy collectible,” said Ali. “We have to be their voice because they cannot speak for themselves.”