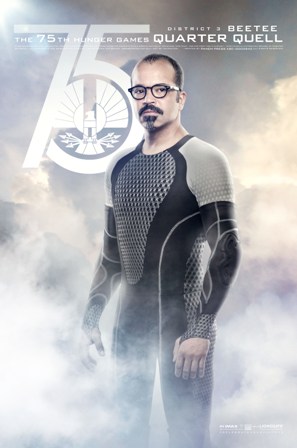 Going Against the Grain

“I do have characters who are more well known than I am, which suits me,” veteran actor Jeffrey Wright once said.

However, playing iconic figures like Dr. Martin Luther King, Jr., Muddy Waters and Colin Powell can sometimes overshadow people in an industry that is obsessed with fame.  But in the case of Jeffrey Wright, fame is overrated and overvalued.  Introducing a story to an unexposed audience is the goal.

“I don’t want people coming to see Muddy Waters and thinking about Jeffrey Wright,” he told Regal Magazine.  “I don’t want them to come see me play Jean Michel Basquiat or Martin Luther King and think about me.  I want them to get into those stories.”

And people have definitely gotten into the stories in Suzanne Collins’ franchise of novels, which may give him the fame and adulation of a totally new fan base because of his role as Beetee in “The Hunger Games: Catching Fire,” which opens nationwide on Nov. 22.

“The Hunger Games” trilogy of novels and subsequent films, center around the fictional nation of Panem, and a government that decides to punish the citizens of each district for rebelling against the Capitol.

“Beetee is a previous victor,” Jeffrey Wright told Regal Magazine.  “So when he was a kid, he won his games by means of electrocution of many of the other unfortunate participants that year.  So in ‘Catching Fire,’ the 75th anniversary games or what’s known as the Quarter Quell, it’s decided that among the previous victors to be chosen for this Quarter Quell…Beetee is one of those who is selected to participate.”

Initially, Beetee is reluctant to participate, but he eventually uses his technological and weapons-making expertise to compete in the Quarter Quell, which becomes a foil for another rebellion.

Although “The Hunger Games: Catching Fire” goes against the grain of the biographical films that he is known for like “Cadillac Records,” “W.” and “Boycott,” Jeffrey Wright prepared for this film in much the same way he has in his past work, by understanding the complexities and the social commentary of his character.

His preparation involved digging into the trilogy of books because “the books provide a comprehensive landscape of this world and also provide as much insight as exists into the nature of these characters.”

Understandably, the popularity of the characters and the novels as a whole attracted the accomplished actor to the role of Beetee.

Wright said, “It’s rare that you have an opportunity to be a part of a film that…comes with a built-in audience, because you make movies so that people see them.  To be asked to be a part of a franchise such as this, which was on its way to becoming one of the most successful franchises in all of cinema is a hard invitation to turn down.”

So will Beetee be invited to participate in the next two installments of “The Hunger Games” film franchise?

Although the character Beetee is obviously not on the level of a King, Powell or even photographer Howard Bingham from the film “Ali,” Jeffrey Wright’s role in “The Hunger Games: Catching Fire” will undoubtedly put him right in the mix of pop culture celebrity.

Even if he does not desire stardom, it is well-deserved for an actor that should be just as well known in cinematic history as Denzel Washington and Sidney Poitier.