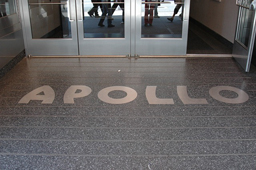 On May 29, the Apollo Theater announced its plans for the theater’s 2018 fundraising gala, which will take place Monday, June 4 at 7 P.M.

“Now more than ever, we recognize the importance of nurturing the next generation of community thought leaders. The Spring Gala gives us an opportunity to celebrate our legacy as an ever-present driving force in music, but it also gives us a chance to highlight the importance of our year-round community and educational programs,” the Apollo Theater President/CEO Jonelle Procope said.

“Throughout its 84-year legacy, the Apollo has always nurtured young talent, musically and professionally, providing springboards for countless careers. As we have all stood on the shoulders of others, it is very important that we give our young people the same opportunities and let them stand on ours.”

Some of the groups that the Apollo Theater has provided a springboard to stardom are the Jackson 5 and New Kids on the Block.

Established musicians like James Brown also have the Apollo Theater to thank for catapulting their careers to new heights.

Brown became an even bigger star upon the release of his “Live at the Apollo” recordings.

Every year the Apollo Theater recognizes corporate sponsors that have given money to the performing arts and community leadership within the African-American community.

This year, The Apollo Theater will present the Corporate Award to SiriusXM radio.

Scott Greenstein, President and Chief Content Officer of SiriusXM, will accept the Corporate Award on behalf of the corporation.

“We are thrilled to receive this recognition and extremely grateful to the Apollo Theater and its community,” Greenstein said. “We feel a kinship for and share a credo with the Apollo; we believe in the power of diversity and making available multi-layered programming that celebrates unfettered free speech and a chorus of diverse voices.

“Our commitment to the Apollo and its community is strong and years deep as we have hosted multiple exclusive and landmark shows at the venue throughout the years. SiriusXM is honored to receive this award and looks forward to many continued successful collaborations between SiriusXM and the Apollo Theater.”

The Apollo Theater Spring Gala starts with a red carpet event at 6 P.M.

The gala concert and awards ceremony start at 7 P.M.

Veteran musician Ray Chew will serve as the musical director for the gala.

Amateur Night at the Apollo Theater began in 1934 as a means to give up-and-coming talent a chance at the big time.

Other events that occur at the Apollo include the annual Africa Now! Festival, as well as the New York premieres of the opera “We Shall Not Be Moved” and the premiere of the theatrical reading of Ta-Nehisi Coates’ National Book Award-winning “Between the World and Me.”

Recently, the Apollo presented “100: The Apollo Celebrates Ella,” a celebration of the legendary musician Ella Fitzgerald.

The theater also hosts festivals and conventions like the Women of the World (WOW) Festival and Breakin’ Convention.

Originally known as the Hurtig and Seamon’s Music Hall, the theater that would become the Apollo opened in 1916.

It became the Apollo Theater in 1934.

In 1985, the famous performance hall reopened for its 50th anniversary with a showcase of talent.

From the start, three things set the Apollo Theater apart from the competition.

First, the theater featured top rank musicians, which earned it a reputation for excellence.

That reputation attracted the top musicians to the venue on a regular basis.

Almost from the beginning, radio stations around the country broadcasted the performances at the Apollo.

As time proceeded, the show transitioned from national radio to national television.

The third feature that set the Apollo Theater apart was the ruthless crowd that would boo not-so-talented artists off the stage in a heartbeat.

At the onset, the format of the club featured the style of Broadway with vaudeville tradition, which included revue groups with singing dancing, comedy and ventriloquists.

Some of the first artists to receive permanent recognition from the Apollo include Wonder, Diana Ross, Fitzgerald, Roberta Flack, Bo Diddley and the Jackson 5.

In 1957, Buddy Holly and the Crickets became one of the first White acts to appear on the Apollo stage.

Honorary chairs for the event include Laura and Richard Parsons, Ronald O. Perelman and Anna Chapman.

The Apollo Theater now holds the status of a landmark from the United States government, the state of New York and New York City.

The television show “Showtime at the Apollo” reaches a worldwide audience weekly on Fox.