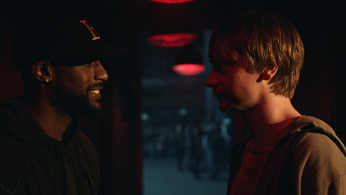 The Art of Hip-Hop’s Battle

Since its inception, rap battles have captured the imagination of hip-hop fans from around the globe.

While hip-hop has provided a better life for many coming from impoverished backgrounds, hip-hop battles have led to labels like violent, misogynistic, racist and homophobic.

So while hip-hop has battled its way to the top of the pop charts, the musical genre still battles with its haters who cannot understand the culture and the message within the music.

With that in mind, filmmaker and Houston native Joseph Kahn, along with actors Jackie Long and Calum Worthy, came back to his hometown to promote his latest project “Bodied,” which attacks hip-hop, hip-hop fans and hip-hop haters in a remarkable movie that opens today at AMC Studio 30 in Houston and Alamo Drafthouse LaCenterra in Katy, Texas.

RegalMag.com sat down with Kahn and Long to discuss the movie, “Bodied.”

“Bodied” will also be available soon via YouTube Premium.

RegalMag.com (RM): Joseph, the character Adam faced a lot of criticism for being racist, misogynistic and homophobic in his rhymes. Was that a direct criticism of hip-hop? Why was that important to put those types of lyrics into the film?

Jackie Long (JL): I grew up in the hood and I’ve been hearing that word since I was born. It’s like a part of my voice sometimes because you don’t even mean to say it sometimes. It’s just a word that comes out. If you see somebody, instead of saying “Good morning,” sometimes to your homeboy if it’s your homeboy you say, “What up my nigga.” Being a Black person, that word is gonna be around forever with us. I think if you’re a rapper and you choose not to say it, then you choose not to say it. But if you have that much power to let your fans not say a word, then you did your job. But I don’t think that word is ever gonna leave. And I don’t have a problem with the word. Of course, if someone says it and… you’re a White boy and somebody saying nigger to me and I don’t know you, I’ll have a problem. But I do have White friends that I’m comfortable with that do say nigga to me. You know, Mexican friends that say nigga to me. But at the end of the day, it’s a word. And it’s so crazy how this world is that the word is so big in this world that it means a lot. Like you’ll die over that word. You can get fired over that word. That word is strong. But in the world that I live in today is so much other s*** going on for me to be worried about that word still because I’ve been hearing it all my life and it’s never gonna change. If I get on the phone right now with one of my friends, he’ll be like, “Talk to you later my nigga.” There’s nothing I can do about it. I can say I’ll never say nigga again. But it will slip out because it’s so natural.

RM: Do you think hip-hop takes too much blame for that because I remember hearing my uncle, who is not of the hip-hop generation, who lived next to a housing project that was supposed to be for single mothers? And he said, it supposed to be for women, but they got them niggas (men) living there. And he’s old school. He’s not a hip-hop head. So, do you think hip-hop has taken too much blame for the popularity of that word?

JL: For sure, hip-hop, I would blame hip-hop because you have to think, N.W.A, what did it stand for?

JL: Niggaz With Attitude. They got in a lot of trouble for having that name. So at the end of the day, of course hip-hop, because you hear it all day from females and you hear it from males. So, it’s hip-hop because lately the world is based around music, no matter what. And rap music is big in this world today, no matter who you are… Rap. I don’t care what year you’re (in), what generation you’re from, wherever, you’re gonna always hear nigga. It is what it is. So rap is to blame.

RM: What should be off limits, as far as subject matter, in rap battles? Pusha T got a lot of criticism recently for exposing Drake’s child and Ja Rule got criticism for talking about Eminem’s daughter years ago.