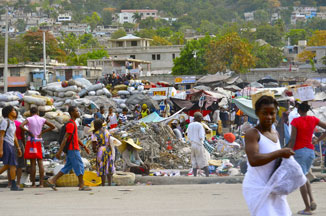 Haitians walk the streets after a past national disaster.

A 7.2 magnitude earthquake struck the Caribbean country of Haiti on Aug. 14, killing over 2,000 people in the process as of Aug. 20.

The BBC reported that the earthquake left 12,000 injured and 300 people missing.

Axios reported that the earthquake left tens of thousands of people homeless.

To makes matter worse, Haiti has a lack of doctors to tend to those injured by the devastating earthquake.

Reportedly, thousands are seeking medical attention in Haiti despite having only a few dozen doctors available.

Dr. Edward Destine, an orthopedic surgeon, said, “I’m the only surgeon over there. I would like to operate on 10 people today, but I don’t have the supplies.”

Early this week, Destine said the doctors in Haiti need intravenous drips and the most basic antibodies.

Additionally, the main airport in the city of Les Cayes is packed as people try to evacuate their loved-ones out of the country.

The New York Times reported, “The earthquake was the latest calamity to convulse Haiti, which is still living with the aftereffects of a 2010 quake that killed an estimated quarter-million people. Saturday’s quake came about five weeks after Haitian president, Jovenel Moise, was assassinated, leaving a leadership vacuum in a country already grappling with severe poverty and rampant gang violence.

“The authorities in Haiti were scrambling to coordinate their response to the quake, mindful of the confusion that followed the one in 2010, when delays in distributing aid to hundreds of thousands worsened the death toll.”

At a news conference on Aug. 15, Prime Minister Ariel Henry vowed “to give a more appropriate response than the one we gave in 2010.”

Dr. Paul Farmar, co-founder of the relief agency Partners in Health, said, “The things we had our disposal in 2010 versus now are night and day.”

Those hospitals have new medical services and training programs.

Those aforementioned problems have made tending to the injured much more difficult.

Despite claiming to have a better plan in place to respond to disasters than they did in 2010, many Haitians have criticized the slow response from their government.

“As a judge, I must not have a political opinion,” said Pierre Cenel, a judge from Les Cayes. “But as a man, as a man concerned about the situation of my country, nothing is working. They didn’t do anything to prepare for this disaster.”

In the affected areas, hospitals were destroyed or overwhelmed by patients needing medical assistance.

Speaking on behalf of displaced Haitians camped out in a field in Les Cayes, pastor Roosevelt Milford bluntly said, “We need help.”

On Wednesday, Henry said, “Haiti is now on its knees.”

Henry added, “The earthquake that devastated a large part of the south of the country proves once again our limits, and how fragile we are.”

He said, “We have to put our heads together to rebuild Haiti. The country is physically and mentally destroyed.”

To make matters worse for the Haitian people, Emmy Award-winning journalist Robin Simmons from WSVN 7 News in South Florida reported that Haiti has a population of 11 million.

However, the country has only received 500,000 doses of the COVID-19 vaccine.

People having to camp in close quarters because of temporary homelessness could drive the country’s COVID-19 numbers up.

Axios reported, “Government officials and the United Nations estimate that about half of the nearly 800,000 people affected by the earthquake are in need of humanitarian assistance, according to the UN Office for Coordination of Humanitarian Affairs.

“Assistance has been slowed, however, due to the weather and as the UN and government authorities negotiate with gangs who control roads and other areas in and around the affected cities and towns.”

On Tuesday, Bruno Maes of the United Nations Children’s Fund (UNICEF) said in a statement, “Right now, about half a million Haitian children have limited or no access to shelter, safe water, health care and nutrition.”

The Weather Channel reported, “Americares, a health-focused relief and development organization, has already sent $3 million worth of medicine and other supplies and has more on the way, according to its website. Among the supplies are IV fluids, surgical and wound care products and PPE.

“Team Rubicon, made up of military veterans, grew out of a small volunteer effort to respond to the devastating 2010 earthquake that killed more than 100,000 people in Haiti. Now the group is on the ground there again, conducting reconnaissance and working (with) other non-governmental organizations to assess the needs, according to its website.

“The American Red Cross is not currently (collecting) donations for Haiti relief efforts, but encourages those who want to help to donate to the charity of their choice.

The Commission recommends paying via credit card or check.

Additionally, keep records of all donations to make sure the donations are not recurring.

Also be advised that scammers can change their caller ID info to make it seem that the call is coming from a local phone number.