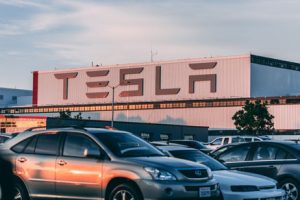 A Tesla plant in Fremont, Calif. has received allegations of workplace discrimination and segregation.

Carmaker Tesla has faced allegations of racism in the past.

Now, the California Department of Fair Employment and Housing (DFEH) has filed a lawsuit against Tesla, alleging a persistent pattern of ongoing racism at its plant in Fremont, Calif.

In a statement, agency director Kevin Kish said, “After receiving hundreds of complaints from workers, DFEH found evidence that Tesla’s Fremont factory is a racially segregated workplace where Black workers were subjected to racial slurs and discriminated against in job assignments, discipline, pay and promotion, creating a hostile work environment.”

After reviewing the complaints, The East Bay Times reported, “As early as 2012, Black and/or African American Tesla workers have complained that Tesla production leads, supervisors, and managers constantly use the n-word and other racial slurs to refer to Black workers.”

The report about Tesla and its alleged hostile workplace said, “They have complained that swastikas, ‘KKK,’ the n-word, and other racist writing are etched onto walls of restrooms, restrooms stalls, lunch tables, and even factory machinery.”

According to The Jerusalem Post, a noose drawn at the Tesla factory remained there for months.

The lawsuit by the DFEH alleges, “Black and/or African American workers are assigned to more physically demanding posts and the lowest-level contract roles, paid less and more often terminated from employment than other workers. They have also complained that Black and/or African American workers are often denied advancement opportunities, and more often and more severely disciplined than non-Black workers.”

The lawsuit alleges, “A common narrative was Black and/or African American workers being taunted by racial slurs and then baited into verbal and physical confrontations, where they, in turn, were the ones disciplined for being purportedly ‘aggressive’ and ‘threatening.’ These written warnings in their personnel files had consequences for later promotional and professional opportunities.”

In a blog post, Tesla denied the allegations, calling the lawsuit against the company “misguided.”

“[Tesla] strongly opposes all forms of discrimination and harassment and has a dedicated Employee Relations team that responds to and investigates all complaints,” the company said in a statement.

The statement added, “[Tesla] has always disciplined and terminated employees who engage in misconduct, including those who use racial slurs or harass others in different ways.”

In a blog post, Tesla slammed the lawsuit saying it “follows a three-year investigation during which the DFEH—whose mission is supposedly to protect workers—has never once raised any concern about current workplace practices at Tesla. Rather, the lawsuit appears focused on alleged misconduct by production associates at the Fremont factory that took place between 2015 and 2019.”

In a statement, Regional NAACP President Rick Callender said, “The Department of Fair Employment and Housing should be applauded for seeking justice against Tesla for their racist behavior.”

On Twitter, the regional NAACP president tweeted, “Racism is rampant at Tesla. @cahinaacp stands behind DFEH & Tesla employees. We demand a racist free workplace. Business & Gov. orgs should know racist behavior is not tolerated in CA. Who thinks they should own a @Tesla now.”

Despite the criticism that Tesla has faced over recent years, the carmaker said it will ask the court to pause the case because they allege that DFEH has declined to give them company specific allegations and facts about its claims.

Furthermore, Tesla said that the lawsuit is an attempt at generating publicity.

The new lawsuit comes months after a judge ordered Tesla to pay approximately $137 million to an elevator operator at the Fremont, Calif. plant who said the company ignored his complaints about racial abuse.

The elevator operator, Owen Diaz, worked at the Tesla plant for approximately a year between 2015 and 2016, and claimed that colleagues repeatedly referred to him as a racial slur.

At the time of the judgement in October 2021, Diaz’s lawyer Lawrence Organ of the California Civil Rights Law Group said, “It’s a great thing when one of the richest corporations in America has to have a reckoning of the abhorrent conditions at its factory for Black people.”

Diaz said he had had enough when his son Demetric had racial epithets hurled his way after he had gotten his son his very first job working for Tesla.

Diaz said, “My son watched his father being broken in front of him.”

The elder Diaz brought his case against Tesla with his son and another former Black employee.

However, only Diaz’s claim went to trial.

Pertaining to the racial slurs and swastikas in the Tesla bathroom, Diaz said, “It’s not like they were removing the offensive behavior; they would just let people keep adding and adding.”

Despite Tesla’s claims of a welcoming environment, at the time of the Diaz’s judgment, the company tried to play down his allegations, noting that Diaz was a contractor and not a Tesla employee.

In a message to staff employees on the Tesla website, human resources executive Valerie Capers Workman wrote, “In addition to Mr. Diaz, three other witnesses (all non-Tesla contract employees) testified at trial that they regularly heard racial slurs (including the N-word) on the Fremont factory floor.

“While they all agreed that the use of the N-word was not appropriate in the workplace, they also agreed that most of the time they thought the language was used in a ‘friendly’ manner and usually by African-American colleagues.”

Capers Workman said Tesla was “not perfect” but was responsive to Diaz’s claims, terminating two contractors and suspending one.

She added, “We’re still not perfect. But we have come a long way.”