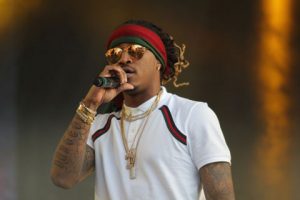 Rappers like Future rocking custom-made Gucci outfits have their roots in Dapper Dan’s Harlem boutique in the 1980s.

Dapper Dan, 77, will become the first African-American designer to receive the prestigious award.

The designer, born Daniel Day, will also become the first designer to win the award without a traditional runway fashion show.

Dapper Dan wrote, “Isn’t it ironic how the fashion world says that Dapper Dan won the Geoffrey Beene Lifetime Achievement Award without ever having a runway show? The streets of Harlem have been my runway for 35 years. Isn’t that where the major luxury brands got their inspiration from? Maybe logo-mania is an illusion. Thank you Harlem, I love you!”

His boutique, named Dapper Dan’s, would take material from Gucci and Louis Vuitton bags and suitcases and turn that material into luxury clothes for a demographic that those high-end brands often ignored.

During the 1980s, it was commonplace to see the biggest players in New York rocking Louis Vuitton jackets and Gucci jogging suits.

Often, the players would get those outfits custom made.

Therefore, no one really could mimic a person’s style if they had enough money to afford a custom fit from Dapper Dan.

Later, when hip-hop music began to gain popularity, rappers tried to emulate the outfits that the gangsters and drug dealers in the city wore.

During the 1980s, it was commonplace to see a line of luxury vehicles outside of Dapper Dan’s Boutique in Harlem.

If one hung out long enough, they might see celebrities like heavyweight boxing legend Mike Tyson or rappers Big Daddy Kane and LL Cool J stop by to pick up their one-of-a-kind outfit.

Unfortunately, using the material from Louis Vuitton, Gucci and others made Dapper Dan a target of those companies for intellectual property theft.

The intellectual property theft charges eventually led to the demise of his famed Harlem boutique, and seemingly an end to the legend of Dapper Dan.

However, when Gucci found themselves embroiled in a racial controversy, they brought Dapper Dan into the company to smooth things over and to collaborate on future fashion lines.

TheGrio reported, “After spending the next decade-plus continuing to design clothes in the fashion underground, the legendary designer resurfaced in the public spotlight in 2017 after a Gucci collection featured a mink jacket that appeared strikingly similar to one he had designed for Olympian Diane Dixon in the late 80s, leading critics to accuse the brand of appropriating the work of a Black designer who the fashion world attempted to cast away decades earlier.”

Dapper Dan told The Guardian, “Cultural appropriation and cultural exchange breaks down to one thing: economics. An exchange involves somebody getting something, for whatever it is they have. Appropriation means you ain’t getting nothing.”

In 2018, Gucci hired Dapper Dan to create his own capsule collection and his own appointment-only atelier workshop in Harlem, which pays homage to his original boutique in the Manhattan, N.Y. neighborhood.

At the time, he told GQ, “I have seen [echoes of] my work in various forms, with various companies. The only new idea that I had to get used to is getting credit for it! But social media was up in arms about it—you know, social media is new to me, so it all took me by surprise. But, no—I plan to just move ahead. Sometimes I would have to address it, in fairness to the public, but all in all, I’m very happy about the arrangement Gucci and I have.”

The designer will receive the unprecedented award at The Pool Room in New York City on Nov. 10.

He said, “Thank you to the CFDA for making me the first Black designer to win this lifetime achievement award. Harnessing the Dapper Dan to Gucci, mounted it on a global track, now the whole world knows what Harlem always knew, that the Dapper Dan brand is a thoroughbred brand.”

Thanks to his memoir and upcoming biopic starring Jerrod Carmichael (“Transformers: The Last Knight”), even people not in touch with fashion news will know Dapper Dan’s rags to riches to rags and back to riches story.

The biopic has received the description of a “high-stakes coming-of-age story.”

According to HypeBeast, “The Hollywood Reporter writes that Jerrod Carmichael will helm the project, adapting the screenplay from the designer’s…memoir. Josh Bratman from Immersive Pictures will produce the film alongside Carmichael while Dapper Dan and Jelani Day, Dan’s son and brand manager, will executive produce the project.”

The biopic had been scheduled for release in 2019.

However, no new release date is currently known for the Dapper Dan biopic.

On Instagram, Dapper Dan wrote, “It’s time to tell all. From growing up with holes in my shoes and swimming The Harlem River, to crossing The Nile River in Africa in search of my identity. I came from nothing, and God has blessed me with a partnership with Gucci, a book deal with Random House, and a now a movie deal with Sony Pictures. Harlem and Africa, through the Grace of God, has shaped my life.”